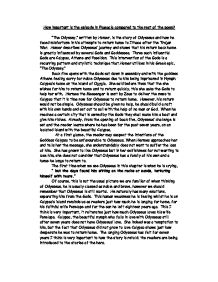 How important is the episode in Phaeacia compared to the rest of the poem? &quot;The Odyssey,&quot; written by Homer

How important is the episode in Phaeacia compared to the rest of the poem? "The Odyssey," written by Homer, is the story of Odysseus and how he faced misfortune in his attempts to return home to Ithaca after the Trojan War. Homer describes Odysseus' journey and shows that his return back home is greatly influenced by several Gods and Goddesses. Three such influential Gods are Calypso, Athene and Poseidon. This intervention of the Gods is a recurring pattern and stylistic technique that Homer utilises in his Greek epic, "The Odyssey." Book five opens with the Gods sat down in assembly and with the goddess Athene feeling sorry for noble Odysseus due to him being imprisoned in Nymph Calypso's home on the island of Ogygia. She said before them that the she wishes for him to return home and to return quickly, this she asks the Gods to help her with. Hermes the Messenger is sent by Zeus to deliver the news to Calypso that it is time now for Odysseus to return home. However, his return would not be simple. Odysseus should be given no help, he should build a raft with his own hands and set out to sail with the help of no man or God. When he reaches a certain city that is owned by the Gods they shall make him a boat and give him riches. Already, from the opening of book five, Odysseus' challenge is set and the reader learns where he has been for the past seven years, on an isolated island with the beautiful Calypso. ...read more.

When Odysseus wakes, she is down by the river with her friends washing laundry and playing games. He wakes up naked and so showing modesty and good manners, being the gentleman he covers himself up with a "leafy bough" so as to not meet the islands people naked. He travels towards the girls, who all run away apart from Nausicaa who stands firm, eager to listen to the stranger's words. Odysseus is a cunning man, and is always quick with flattery as he speaks to Nausicaa, which takes the emphasis away from his shabby appearance. Fearing that she may become scared if he were to grab her knees in an act of supplication, he decides to speak to her from a distance. This shows how Odysseus always thinks of every situation before he decides what to do; ensuring that the decision he has made is correct and plausible. With his speech to Nausicaa, he makes her feel sorry for him, partly because he tells her off his suffering, and partly because he seems to appear so pleasant to her. Odysseus knows that in this situation he cannot use his handsome good looks to get around her but must instead use the power of his speech to persuade her for help. This is does by using flattery and by charming her, which Nausicaa seems to respect. She is stood alone, without her two maidservants and without her veil, two things that normally protect her person and reputation, perhaps showing that how Odysseus is speaking to her she feels comfortable with. ...read more.

Though its discussion of the planned trysts between the two lovers and the cleverly wrought trap used by Aphrodite's cheated husband, Hephaestus, to catch the adulterers in the act ends the song on a light note, the song clearly has relevance for the morose and dejected Odysseus. It invites us to recall his helpless transgression with Calypso and points to the future, when, like Hephaestus, Odysseus will take vengeance upon those who have tried to steal his bed. The contrast between the Phaeacian youths' na�ve glory-seeking and Odysseus's somberness despite having achieved considerable glory highlights how Odysseus's painful experiences have matured him. Inexperienced in life's hardships, the youths act rashly, as when Broadsea insults Odysseus, to attempt to demonstrate their manhood. The exhortation of the youth Laodamas to Odysseus, "What greater glory attends a man . . . / than what he wins with his racing feet and striving hands? / . . . throw your cares to the wind!" illustrates the youths' simplistic preoccupation with physical prowess ("racing feet," "striving hands") (8.170-172). Odysseus, on the other hand, though clearly capable of besting the youths in athletic competition, exudes poise in the face of the youths' carefree brazenness, exerting himself only to defend his honor after Broadsea's insult. His retort that "[p]ains weigh on my spirit now, not your sports," displays his prioritization of the more grave concerns of family and loss over the trivial concern of glory for its own sake (8.178). Likewise, Nausicaa's immature attraction to Odysseus proves insignificant to him and cannot trump his desperate longing to return home. ...read more.