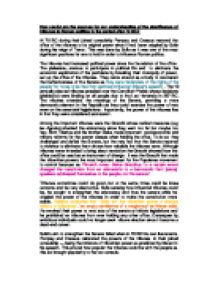 How useful are the sources for our understanding of the significance of tribunes in Roman politics in the period after 70 BC?

How useful are the sources for our understanding of the significance of tribunes in Roman politics in the period after 70 BC? At 70 BC during their joined consulship Pompey and Crassus restored the office of the tribunes to its original power since it had been crippled by Sulla during his reign of Terror. This was done by Sulla as it was one of the most significant positions for one to hold in order to influence Roman politics. The tribunes had increased political power since the foundation of the office. The plebeians, anxious to participate in political life and to eliminate the economic exploitation of the patricians by breaking their monopoly of power, set up the office of the tribunes. They came around as a body to counteract the ineffectiveness of the Senate as they were 'defenders of the rights of the people' for 'votes to be free from patrician influence' (Macer's speech). The 10 annually elected tribunes presided over the Concilium Plebis whose decisions (plebiscita) were binding on all people due to the Lex Hortensia in 287 BC. The tribunes attended the meetings of the Senate, providing a more democratic element in the Republic as they could exercise the power of veto even on the senatorial legislations. ...read more.

This proved how popular the tribunes could be with the people as this act brought popularity to the two consuls. Tribunes could be used to undermine the traditional powers of the senate, often exploited by politically ambitious men to promote their own political careers. In essence, a clever consul or an ambitious individual could buy them though bribery to impose his policies as they preferred 'committing wrong for payment than do right for nothing' (Macer's speech). Both Pompey and Caesar used tribunes to acquire authority. As Suetonius informs us Gabinius passed for Pompey his lex gabinia so that he was given command against the pirates (despite the opposition that Cssius Dio says Gabinius faced) and Manilius proposed that Pompey should be given command against Mithridates. The tribunes' accomplishments are significant since both tasks brought Pompey enormous glory. Vatinius 'though not coming cheap' passed Caesar's legislations through the assembly by bypassing the senate. One of the most important tribunes was Clodius 'who recognized no limits' (Velleius). He was a patrician who underwent adoption in order to become plebeian (Suetonius 20) so as to manage to be elected tribune - such was the importance of the office! ...read more.

On the other hand, Mark Antony's importance in the Roman Politics did not occur while he was a tribune but later on when he was part of the 2nd Triumvirate. As a result, the tribunes could after the course of events, but other offices or positions of power (e.g. consul/dictator) could be more effective. Suetonius, additionally, informs us that upon Caesar's death Octavian 'felt it his duty to avenge Caesar and keep his decrees in force'. 'Stronger authority was needed to implement his plans [thus he] announced his candidature for a tribune ship...although he was a patrician and not yet a Senator,' therefore Octavian considered the tribunes a way to affect Roman politics. Due to that, in 23 BC Augustus received tribunitian sacrosanctity which gave him civil authority and all the power of the tribunes without actually holding the office, being his constitutional basis for the Principate. The very fact the existence and power of the tribunes was an issue of contention shows their importance. However, the tribunate died a death along with a lot of other positions of authority after Julius Caesar's death in 44 BC. The concentration of power into the hand of tribunes like Clodius is what eventually led to the collapse of the republic and all their powers being given to the first Roman Emperor, Augustus. ...read more.