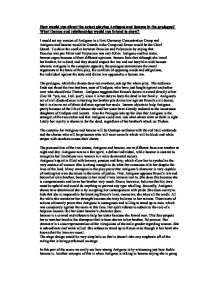 How would you direct the actors playing Antigone and Ismene in the prologue? What themes and relationships would you intend to show?

How would you direct the actors playing Antigone and Ismene in the prologue? What themes and relationships would you intend to show? I would set my version of Antigone in a n**i Germany Concentration Camp and Antigone and Ismene would be Guards in the Camp and Kreon would be the Chief Guard. To show the conflict between Eteocles and Polyneices by saying that Eteocles was pro-Hitler and Polyneices was anti-Hitler. Antigone and her sister, Ismene argue because of their different opinions. Ismene feels that although she loved her brother, he is dead, and they should respect the law and not bury him with honour whereas Antigone is the complete opposite, the prologue summarises the moral arguments at the basis of this play, the conflicts of opposing needs and obligations, the individual against the state and divine law opposed to a human law. The prologue, which the chorus does not overhear, sets up the whole play. The audience finds out about the two brothers, sons of Oedipus, who have just fought against each other over who should rule Thebes. Antigone suggests that Kreon's decree is aimed directly at her (line 38: "yes, me, I tell you"), since it is her duty to bury the dead in her family. Antigone's act of civil disobedience in burying her brother pits divine law against Kreon's civil decree, but it is also an act of direct defiance against her uncle. ...read more.

Doubting the wisdom of her sisters plan to break the law and bury Polyneices, Ismene argues: "We who are women should not contend with men; We who are weak are ruled by the stronger, so that We must obey..." Once again Ismene's words clearly state her weak, feminine character and helplessness within her own dimensions. Antigone, not happy with her sisters response chides her sister for not participating in her crime and for her passivity, saying, "Set your own life in order"(346). For Antigone, no law could stand in the way of her strong consideration of her brother's spirit, not even the punishment of an early death. Ismene is more practical; knowing the task is impossible, she feels the situation to be hopeless. It is a wonder, which of the two sisters are really guilty of these chronic charges. Of course, Antigone acted so quickly, and failed to take the advice of the moderate sister, Ismene. Instead, going against Kreon's words, Antigone rashly goes ahead and breaks the law. Antigone is a fool, she must learn that such defiance, even when justified, is not conductive to longevity. Although Antigone is foolish, she is also courageous and motivated by her morals. Proper burial of the dead was, according to the Greeks, prerequisite for the souls entrance into a permanent home. Therefore, perhaps Ismene is also foolish for her quick refusal to help Antigone perform the duty of Polyneices proper burial. ...read more.

Most people are very doubtful about whether or not the laws of god are truly upheld. Human law is the type of law that is set up to govern the land and the community. Human law can be characterised as "rules of conduct of organised society, enforced by threat of punishment". Human law is usually set up by the head of a community or by the governors of the land. This type of law is normally enforced by people known as officers or guards. They make sure that the law of the land is followed accordingly. There are people in communities that do not follow the laws that are put into effect by humans. This is apparent in the play Antigone, when Antigone herself disobeys a law that was set up by King Kreon, a law that went against the beliefs she held towards the law of the Gods. The prologue contrasts the differences in character between Antigone and Ismene. Ismene works of what is sensible, while Antigone uses more emotion. "Antigone: He is my brother. And he is your brother, too." (Talking about burying Polyneices). Ismene: "But think of the danger! Think what Kreon will do". I think that contrast between Antigone and Ismene is shown very well in the prologue very well because it shows that the emotion Antigone shows and timid ness Ismene shows going against Kreon's decree. My design concept of setting Antigone in a n**i Germany Concentration Camp will work well because I can show the family feud by Kreon being pro-Hitler and Antigone being anti-Hitler. ...read more.