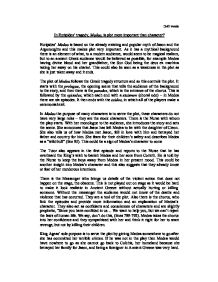 In Euripides' tragedy, Medea, is plot more important than character?

1245 words In Euripides' tragedy, Medea, is plot more important than character? Euripides' Medea is based on the already existing and popular myth of Jason and the Argonoughts and this makes plot very important. As it has a mythical background there is an element of what, to a modern audience, would seem to be magical realism, but to an ancient Greek audience would be believed as possible, for example Medea having divine blood and her grandfather, the Sun God being the deus ex machina taking her away on his chariot. This could also be seen as a weakness in the plot as she is just taken away and it ends. The plot of Medea follows the Greek tragedy structure and so this controls the plot. It starts with the prologue, the opening scene that tells the audience of the background to the story, and then there is the parados, which is the entrance of the chorus. This is followed by the episodes, which each end with a staismon (choral ode) - in Medea there are six episodes. It then ends with the exidos, in which all of the players make a ceremonial exit. ...read more.

King Ageas' sole purpose is to serve the plot by giving Medea somewhere to go after she has committed her terrible crimes. If he was not in the play then Medea would have nowhere to go as she cannot go back to Colchis, her homeland because she betrayed her family for Jason, and being a foreigner in Ancient Greece was very hard. Her future would be very uncertain, "you have your city here ... I am alone" (lines 242-244). However character also plays an important role. Euripides was the youngest of the three most famous tragedians, and his style differs significantly from that of Aeschylus and Sophocles. Euripides looked more closely at human rather than divine motivation. Because of this his characters focus much more on psychological realism. He focused on human emotions such as love, passion, anger and actions such as betrayal. In addition Euripides speaks of issues of a more controversial nature, including the role of women. In this play there is not a male protagonist, but a female one. We see her motivations and her realism. The audience views the plot from her point of view. She is not only a woman, but also a witch, this shows how people fear women with power. ...read more.

"In this way I will hurt my husband most"(line 796), and her plan works, Jason's devastation is shown in the line "you have destroyed me, woman!" We see Medea's massive internal conflicts - her bitter love for her children and her pride and desire to hurt Jason. She is torn between her feelings. We see that even though Medea has some divine heritage she is mostly human "you are of noble birth, descended from the Sun God ... but we are women too" (lines 395-396) and so she has flaws - her love, almost obsession for Jason and her angry nature. Jason describes her as "a lioness, not human" (line 1322). This animal image shows her angry nature, and also her dominance as in a pack of lions the lionesses hunt and are the 'bread winners'. In Poetics, Aristotle said, "Plot then is the first principle, and, as it were, the soul of tragedy: character holds the second place" this is true for most tragedies of this time. However Euripides' Medea seems to be the other way round, with characters being the 'soul' of the play and plot holding second place. Character is more important in Euripedes' play because of their realism and the development of their personalities. However plot is also very important because many of the characters are there solely to serve the plot, the stock characters. ...read more.