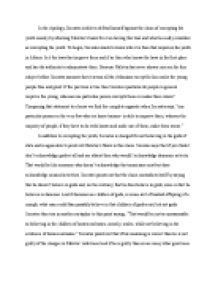 In the Apology, Socrates is able to defend himself against the claim of corrupting the youth mainly by attacking Meletuss basis for even having this trial

﻿In the Apology, Socrates is able to defend himself against the claim of corrupting the youth mainly by attacking Meletus?s basis for even having this trial and what he really considers as corrupting the youth. To begin, Socrates wants to know who it is then that improves the youth in Athens. Is it the laws that improve them and if so then who knows the laws in the first place and has the authority to administrate them. ...read more.

Comparing that statement to a horse we find the complete opposite when Socrates says, ?one particular person-or the very few who are horse trainers- is able to improve them, whereas the majority of people, if they have to do with horses and make use of them, make them worse.? In addition to corrupting the youth, Socrates is charged for not believing in the gods of state and is again able to point out Meletus?s flaws in this claim. ...read more.

And if diamons are children of gods, or some sort of b*****d offspring of a nymph, what man could than possibly believe in that children of gods exist, but not gods. Socrates then ties in another metaphor to this point saying, ?That would be just as unreasonable as believing in the children of horses and a***s- namely, mules- while not believing in the existence of horses and a***s.? Socrates points out that if his reasoning is correct than he is not guilty of the charges in Meletus? indictment and if he is guilty than so are many other good men. ...read more.