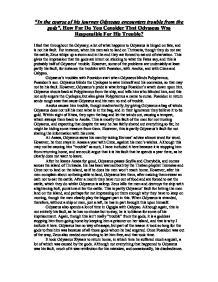 In The Course Of His Journey Odysseus Encounters Trouble From The Gods- How Far Do You Consider That Odysseus Is Responsible For His Trouble?

"In the course of his journey Odysseus encounters trouble from the gods". How Far Do You Consider That Odysseus Was Responsible For His Trouble? I feel that throughout the Odyssey, a lot of what happens to Odysseus is hinged on fate, and is not his fault. For instance, when his men ask to land on Thrinacia, though they do not eat the cattle, Zeus whips up a storm and in the end they are forced to eat out of starvation. This gives the impression that the gods are intent on sticking to what the Fates say, and this is probably half of Odysseus' trouble. However, some of the problems are undeniably at least partly his fault, for instance the troubles with Poseidon, with Aeolus, and with Circe and Calypso. ...read more.

However, this is partly Odysseus's fault for not sharing the information with his crew. At Aeaea, Odysseus saves his men by taking Hermes' advice almost word for word. However, he then stays in Aeaea a year with Circe, against his men's wishes. Although this may not be causing him "trouble" as such, I have included it here because it is stopping him from returning home, and we could argue that it is his fault that he spends a year there, as he clearly does not want to leave. After he leaves Aeaea for good, Odysseus passes Scylla and Charybdis, and comes across the island of Thrinacia. He has been warned both by the Theban prophet Teiresias and Circe not to land on the island, as if he does his men won't reach home. ...read more.

Although again, this is not entirely his fault, as he has no choice but to stay, he is to blame for some of his imprisonment. Again, though this isn't really "trouble" from the gods, it is a goddess stopping him from going home by keeping him a prisoner on her island, and that is why I include it here. Odysseus has no way of escape, but part of the reason it took so long for the gods to free him was because of all those gods whom he had angered. Once Poseidon was out of the way, Zeus also needed convincing to let him free, and that took time. It took Odysseus 20years to return home, in which time he suffered much anguish, a lot of which was caused by the gods. Although not everything that happened to Odysseus was his fault, much of it was retribution for his mistakes, and occasionally, his disobedience. ...read more.