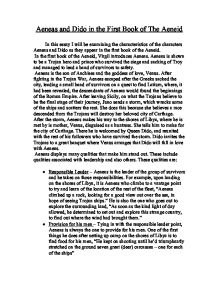 In this essay I will be examining the characteristics of the characters Aeneas and Dido as they appear in the first book of the Aeneid.

Aeneas and Dido in the First Book of The Aeneid In this essay I will be examining the characteristics of the characters Aeneas and Dido as they appear in the first book of the Aeneid. In the first book of the Aeneid, Virgil introduces Aeneas. Aeneas is shown to be a Trojan hero and prince who survived the siege and sacking of Troy and managed to lead a band of survivors to safety. Aeneas is the son of Anchises and the goddess of love, Venus. After fighting in the Trojan War, Aeneas escaped after the Greeks sacked the city, leading a small band of survivors on a quest to find Latium, where, it had been revealed, the descendants of Aeneas would found the beginnings of the Roman Empire. After leaving Sicily, on what the Trojans believe to be the final stage of their journey, Juno sends a storm, which wrecks some of the ships and scatters the rest. She does this because she believes a race descended from the Trojans will destroy her beloved city of Carthage. After the storm, Aeneas makes his way to the shores of Libya, where he is met by is mother, Venus, disguised as a huntress. ...read more.

Ilioneus praises him to Queen Dido "No man has been more just or dutiful, no one greater in war and fighting." * Self-Pitying - This ties in directly with the emotional point. Aeneas, despite being a courageous and good leader, occasionally enters into bouts of self-pity. One of these is when he is caught in the storm sent by Juno. He cries out, wishing that he had died a "hero's death" on the fields of battle at Troy, rather than suffer in the storm. "You were the lucky ones," he cries, "three times lucky and more, who had the good fortune to die under the walls of Troy, before the eyes of your fathers! Why couldn't I have died and yielded my soul to Diomede, bravest of the Greeks, on the Trojan Plains?" * Warmth - When Aeneas meets Dido he shows warmth towards her. He compliments her and thanks her for her offer to allow the Trojans to live in Carthage. "What golden age were you born in? What great parents produced such a daughter? As long as rivers flow down to the seas, as long as the shadows sweep over the mountains, and the sky keeps the stars alight, your name shall live for ever in honour and praise". ...read more.

The Queen also sends food down to the survivors camped on the shore, "She sent twenty bulls to his companions down on the shore, a hundred huge, bristly-backed swine, the same number of ewes and fat lambs, and gifts of wine to delight them." Queen Dido even offers the Trojans a permanent home in Carthage, where they are to be treated as equals, "This city I'm building, it's yours. Haul up your ships. Trojan or Tyrian I'll treat you the same." * Warmth - Queen Dido shows warmth and affection to Aeneas and his son. She hugs them and is touched by their gifts to her. "Fondly she hugs him (Aeneas' son), again and again to her breast". * Fair and Just - Queen Dido is fair to all her subjects. She allocates responsibility and labour equally and she makes fair and just laws. The way Virgil introduces Aeneas and Dido in the first book of the Aeneid makes the similarities between them easy to identify: They have both suffered hardships and have subsequently been forced to leave their native lands; they both are on quests to found new cities for their people; they both display distinctive leadership qualities; they are both capable of affection and warmth. It is these similarities between the two that makes it easier to identify them as both being the heroes in the book. ...read more.