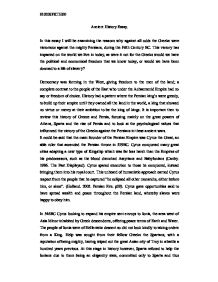 In this essay I will be examining the reasons why against all odds the Greeks were victorious against the mighty Persians, during the Fifth Century BC.

Ancient History Essay. In this essay I will be examining the reasons why against all odds the Greeks were victorious against the mighty Persians, during the Fifth Century BC. This victory has impacted on the world we live in today, as were it not for the Greeks would we have the political and economical freedom that we know today, or would we have been doomed to a life of slavery? Democracy was forming in the West, giving freedom to the men of the land; a complete contrast to the people of the East who under the Achaemenid Empire had no say or freedom of choice. History had a pattern where the Persian king's were greedy, to build up their empire until they owned all the land in the world, a king that showed no virtue or mercy at their ambition to be the king of kings. It is important then to review this history of Greece and Persia, focusing mainly on the great powers of Athens, Sparta and the rise of Persia and to look at the psychological values that influenced the victory of the Greeks against the Persians in these ancient wars. It could be said that the main founder of the Persian Empire was Cyrus the Great, an able ruler that ascended the Persian throne in 559BC. Cyrus conquered many great cities adapting a new type of Kingship which was far less harsh than the Empires of his predecessors, such as the blood drenched Assyrians and Babylonians (Canby. 1986. The Past Displayed). Cyrus spared execution to those he conquered, instead bringing them into his royal court. This unheard of humanistic approach earned Cyrus respect from the people that he captured "he eclipsed all other monarchs, either before him, or since". (Holland. 2005. Persian Fire. p20). Cyrus gave opportunities said to have spread wealth and peace throughout the Persian land, whereby slaves were happy to obey him. ...read more.

1997. p290). Most northern Greek cities submitted, many with the aid of Persian bribes, yet in the eyes of the Athenians and Spartans there was no choice, but to refuse and both chose to dispel the envoys thus declaring war on Persia. In 490BC a second attack was sent to Greece, this time across the Aegean Sea, under the command of Datis and Artaphernes. Bribes were given to the Greek people of Euboea to join their forces. Treachery was now becoming a common theme amongst the Greeks, all the time enlarging the Persian army and yet enthusing the Athenians and Spartans to fight for their freedom. An attack was now imminent upon Athens and so the Athenian General Miltiades went to the polemarch and said "Thou hast only to add thy vote to my side and thy country will be free, and not free only, but the first state in Greece". (Herodotus. 1997. p344). Miltiades gained permission to lead the Greek army of ten thousand hoplites to defend its ground at Marathon where a former Athenian tyrant Hippias led the Persian troops. The Spartans were not able to assist at this battle until it was a full moon. (Herodotus. 1997). The Persians were confident that their army of twenty five thousand would overwhelm the Greek resistance. When Militates laid his eyes on the enormous multi ethnic troops they faced, he had to devise an acute approach to offset their deficit in numbers. Using his excellent military logic he decided to strengthen the wings and leave the centre weaker, with only a few ranks, so on impact the Greek hoplites and lightly armoured Persian centre became a b****y brawl, this allowed the Greek wings to run around the Persians, capturing them in a pincer movement leading to a Persian retreat. Miltiades and his army then marched on to Athens to find their city gates had been opened, they had been betrayed. The Athenians were able to close their city gates and defeat the attacking Persians. ...read more.

(Holland. Persian Fire. 2005). For eleven days there was a standoff with the Greeks refusing to be drawn into the open terrain as this would have given the Persian cavalry, a military advantage. Greek supplies were running low so Pausanias ordered a retreat, and with this news Mardonius sent his cavalry to attack the Greeks, the Persians were exhausted as they had to fight uphill and so were defeated. The Greeks no longer feared the Persians and with the last Persians returning home to Xerxes the invasion of Greece was over. Although different in their social foundations, Athens and Sparta had broken away from the traditional tyranny ruling of one. The birth of Democracy had not long formed, yet people saw the worth in fighting for this society. Persian Kings believed they could use bribes, treachery and force to increase their numbers, however this became known and in the end the Greeks used this tactic to help them win the naval battle of Salamis. The Greeks had their freedom and families to fight for against succumbing to slavery and after defeating the Persians at the battle of Marathon by using their greater military tactics, this changed the psychology of the Greeks giving them confidence that their enemy could be defeated. The Persians continuous greed and belief that their numbers could beat the smaller Greek armies which led them to attack on Greek territory also gave the Greeks a massive advantage. In the end it was the Greeks superior military and naval forces, and commanders such as Miltiades and Themistocles that led them to beat the vast and almighty power of Persia. The Achaemenid greed and arrogance managed to overshadow its power and reach, thus culminating in its downfall of its empire. "Who could foretell such anguish? The seamen of the Hellenes In Persia's evil day Brought forth their ships to battle, And took our pride away". (Aeschylus. 1961. The Persians. ...read more.