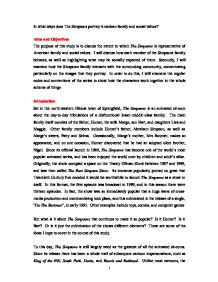 In what ways does The Simpsons portray American family and social values?

In what ways does The Simpsons portray American family and social values? Aims and Objectives The purpose of this study is to discuss the extent to which The Simpsons is representative of American family and social values. I will discuss how each member of the Simpsons family behaves, as well as highlighting what may be socially expected of them. Secondly, I will examine how the Simpsons family interacts with the surrounding community, concentrating particularly on the images that they portray. In order to do this, I will examine the regular codes and conventions of the series to show how the characters work together in the whole scheme of things Introduction Set in the north-western Illinois town of Springfield, The Simpsons is an animated sit-com about the day-to-day tribulations of a disfunctional lower-middle-class family. The main family itself consists of the father, Homer, his wife Marge, son Bart, and daughters Lisa and Maggie. Other family members include Homer's father, Abraham Simpson, as well as Marge's sisters, Patty and Selma. Occasionally, Marge's mother, Mrs Bouvier, makes an appearance, and on one occasion, Homer discovered that he had an adopted older brother, Nigel. Since its official launch in 1989, The Simpsons has become one of the world's most popular animated series, and has been enjoyed the world over by children and adult's alike. Originally, the show occupied a space on the Tracey Ullman Show between 1987 and 1989, and was then called The Bart Simpson Show. Its immense popularity proved so great that Twentieth Century Fox decided it would be worthwhile to launch The Simpsons as a show in itself. In this format, the first episode was broadcast in 1989, and in this season there were thirteen episodes. In fact, the show was so immediately popular that a huge wave of cross-media production and merchandising took place, and this culminated in the release of a single, "Do The Bartman", in early 1991. ...read more.

Lisa is extremely intelligent, taking from her mother's side, and this alienates her from her peers. She responds to this by immersing herself in her hobbies, including the saxophone, and her schoolwork. Lisa is usually top of her class grades-wise. But, her competitiveness has sometimes caused her discomfort, as was the case when a girl one year younger than herself entered her class and took the crown of cleverest person and hardest worker. Lisa reacted to this negatively, by attempting to replace her science project with a cow's heart as part of a sick joke. Whilst Lisa herself usually isn't very funny, the amusing situations that she gets herself into as a result of her meddling constitute her contribution to the show. Maggie Maggie is the least developed member of the Simpson family. The fact that she has been a baby for the last ten years does little to help this. But this is not to say that she hasn't had her moments. Maggie, may be the smartest Simpson, as she has often shown. When she is placed in the day-care centre, she shows her intelligence by devising a way to get back her pacifier. She is clearly smart, as when Lisa quizzes Maggie with flash cards in the blood donation episode. Maggie provides an extra touch to many episodes, especially when she is revealed to be Mr. Burns' attacker in the two-part cliffhanger. Codes and Conventions and the Surrounding Community All of The Simpsons episodes follow a particular narrative pattern, which is not too dissimilar to Vladimir Propps' idea of equilibrium - enigma - equilibrium. During the now-famous credit sequence at the beginning of each episode, Bart can be seen writing out his lines in detention, each episode having different lines. Examples include, "I will not instigate revolution", "I will not call my teacher 'Hot Cakes'", "I will not belch the National Anthem", and "The Pledge of Allegiance does not end with Hail Satan". ...read more.

However, she learns from her mistakes, never making the same wrong move twice. Maggie has not been allowed to grow up enough for her character to develop significantly. What we have seen of her offers great potential. She may in fact be the smartest Simpson, if Lisa's blood-type card test and Zorg's DNA are anything to go by. She is still very prone to negative influences, as was the case when she tried to attack Homer in the episode concerning the effects of media violence on the young. But, she has a caring family that does all it can to protect, and she seems to be learning this. The surrounding community interacts with the Simpsons family like any other small-town American community. Occasionally, disputes break out between a Simpson and a member of the community. But their knack for communicating means that any trouble is quickly resolved. Sometimes, for the better, these communications break down, and the end result is a fight or riot, as was the case when Homer punches the alien Zorg on the Jerry Springer show in the latest yet-to-be-shown video episode. Credits: All of "The Simpsons" pictures used in the following posters were obtained from The Simpsons Library, an internet site dedicated to all things concerning The Simpsons. Evaluation of Print Products The central theme that I hoped to convey in my three posters was how The Simpsons has managed to cross over into other areas of media production from its original guise as a cartoon. The first of my posters is a new version of the "Do the Bartman" single cover. In 1991, The Simpsons had its first screening on Rupert Murdoch's Sky One channel. Within a few months the show had become so popular that a huge wave of cross media production took hold, and within a few years, The Simpsons were everywhere. My second piece simply shows the regular Simpsons cast list, highlighting the links between the family and the surrounding community. My last piece is an impression of a web page, of which The Simpsons occupy many sites. ?? ?? ?? ?? 8 1 ...read more.