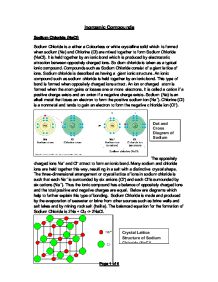 Inorganic Compounds Sodium Chloride (NaCl) Sodium Chloride is a either a Colourless or white crystalline solid which is formed when sodium (Na) and Chlorine (Cl) are mixed together to form Sodium Chloride (NaCl). It is held together by an ionic bond which is produced by electrostatic attraction between oppositely charged ions. Sodium chloride is taken as a typical ionic compound. Compounds such as Sodium Chloride consist of a giant lattice of ions. Sodium chloride is described as having a giant ionic structure. An ionic compound such as sodium chloride is held together by an ionic bond. This type of bond is formed when oppositely charged ions attract. An ion or charged atom is formed when the atom gains or losses one or more electrons. It is called a cation if a positive charge exists and an anion if a negative charge exists. Sodium (Na) is an alkali metal that loses an electron to form the positive sodium ion (Na+). Chlorine (Cl) is a nonmetal and tends to gain an electron to form the negative chloride ion (Cl-). The oppositely charged ions Na+ and Cl- attract to form an ionic bond. Many sodium and chloride ions are held together this way, resulting in a salt with a distinctive crystal shape. ...read more.

Sodium chloride has a large and diverse range of uses. It is spread over roads to melt ice by lowering the melting point (mpt: 32�C) of ice; electrolysis separates the molten ionic compound into its elements. The salt has an important role in the regulation of body fluids. It is used in medicines and livestock feed. In addition, salt caverns are used to store chemicals such as petroleum and natural gas. Uses Percentage Use (%) De-icing Agents 70 Table Salt 20 Chemicals, Plastics, Cleaning agents 10 Properties Melting Point 801 �C Boiling Point 1413 �C Solubility in Water Completely dissolves Sodium Chloride has a high melting and boiling point as it is an ionic compound. Ionic compounds have strong forces of attraction between the ions in all directions and form a giant structure. Ionic bonds are strong, all ionic compounds are solid at room temperature and they do not conduct electricity because the ions within them are not free to move. When sodium chloride is dissolved in a solvent such as water, it will conduct electricity because the ions are free to move in the solution. Due to the fact Sodium Chloride is soluble in water due to interactions between ions and polar water molecules, for this fact it can be used in perspiration to neutralise acidity. ...read more.

generally have a low melting and boiling point this is because they don't have any bonds which need to be broken, because it is an intermolecular force it makes it easy to pull apart the molecules, it is because of this that covalent bonds are easy to break. This is the reason why nitric acid is used to make explosives; Nitric acid is used for nitrating in other production of explosives. When nitro groups are added much oxygen is formed which can cause explosion, and this means that it oxides other atoms very fast. An example of nitrated explosives is nitro glycerine and tri nitro toluene. Nitro glycerine is also produced in the making of pharmaceuticals. Additional use of the acid is as a surface treatment of metal in the steel industry and as a cleaning agent in the food industry. Covalent bonds don't tend to be able to dissolve in water due to the fact water is polar and most covalent compounds are non-polar, however, nitric acid is a polar, so it doesn't dissolve in water, it mixes with the water, which makes it very soluble in water which makes it very ideal for plants it is because of this feature that makes it great for the fertilization of plants. Nitric Acid ionizes readily in solution, forming a good conductor of electricity. ...read more.