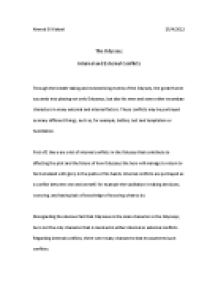 Internal and External Conflicts in The Odyssey

﻿Ahmed El Wakeel 25/4/2012 The Odyssey: Internal and External Conflicts Through the breath-taking and mesmerizing events of the Odyssey, the great Homer succeeds into placing not only Odysseus, but also his men and some other secondary characters in many external and internal factors. These conflicts may be portrayed as many different things, such as, for example, battles, lust and temptation or humiliation. First off, there are a lot of internal conflicts in the Odyssey that contribute to affecting the plot and the future of how Odysseus the hero will manage to return to his homeland with glory in the palms of his hands. Internal conflicts are portrayed as a conflict between one and oneself, for example the vacillation in taking decisions, worrying, and having lack of knowledge of knowing what to do. Disregarding the obvious fact that Odysseus is the main character in the Odysseys, he is not the only character that is involved in either internal or external conflicts. Regarding internal conflicts, there were many characters that encountered such conflicts. The first of the characters which encounters an internal conflict is one of Odysseus's men; he is Eurylochus. After Odysseus dispatches his men and places his own Eurylochus as their leader, they wonder off into the island of Aeaea. After a certain period of time of roaming the island, Eurylochus finds and discovers the goddess Circe's palace. ...read more.

The conflict ended with Odysseus rejecting that thought and not cutting off Eurylochus's head. Moving on from the topic of worrying and hesitation in decision making, Odysseus also encounters many different internal conflicts regarding his lusts and temptations, due to the fact that he has been away from his wife Penelope for a long time and other than the fact that he misses, she has not pleasured him and satisfied his sexual needs for a long period of time. One of the internal conflicts regarding Odysseus's temptations and lust regards the nymph Calypso. Calypso inhabited the island Ogygia and lived there where she seduced and charmed many victims. When Calypso encountered Odysseus in her home island of Ogygia she fell in love with him and trapped him on her island for several years. Calypso offered to marry him and make him her immortal husband and give him eternal youth. Although, this was an offer that cannot be decline being proposed by a beautiful nymph Odysseus rejected the offer. Odysseus went through and internal conflict with himself regarding his temptation, but he ended the conflict with the decision of rejection. Odysseus rejected the offer due to the fact that he wanted to return to his homeland of Ithaca and go back to his wife Penelope and his son Telemakhos. ...read more.

This is both an external conflict and internal conflict because the suitors externally offend Odysseus and attempt to hurt him while Odysseus internally maintains his temper and calms himself using his patience to maintain his secret identity and his disguise to manage to take revenge on the suitors later on in the epic. The last but not least external conflict within this phantasmagorical piece of Greek literature is the final battle between the suitors and Odysseus and his son. After locking the door of Odysseus's home and giving a speech about how the suitors came into his home and consumed a lot and tried to marry his Penelope and steal her from him, he took his bow and started hunting the suitors like deer a closed room one by one. With the help of Telemakhos, his son, not one life of any suitor was spared. All was gone. In conclusion, there were many internal and external conflicts in this mesmerizing piece of Greek literature by the one and only Homer. Both internal and external conflicts were regarding both Odysseus ad other characters in the Odyssey, but obviously, the focus was mainly on the hero of the epic, Odysseus. Odysseus has portrayed great decision making skills, and breathtaking strength through all of the conflicts he was regarded in either internal or external. The guile illustrated by Odysseus through cannot be disregarded as well, for he used his skill and cleverness to overcome many conflicts and obstacles. ...read more.