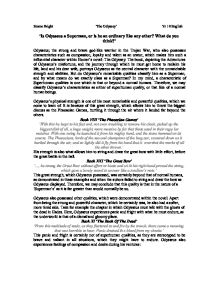 'Is Odysseus a Superman, or is he an ordinary like any other? What do you think?'

Emma Bright 'The Odyssey' Yr 10 English 'Is Odysseus a Superman, or is he an ordinary like any other? What do you think?' Odysseus; the strong and brave god-like warrior in the Trojan War, who also possesses characteristics such as compassion, loyalty and talent as an orator, which makes him such a influential character within Homer's novel: The Odyssey. The book, depicting the Adventures of Odysseus's misfortune, and the journey through which he must get home to reclaim his life, land and his dear wife, portrays Odysseus as the central character with the unmatchable strength and abilities. But do Odysseus's remarkable qualities classify him as a Superman, and by what means do we exactly class as a Superman? In my mind, a characteristic of Superhuman qualities is one which is that or beyond a normal humans. Therefore, we may classify Odysseus's characteristics as either of superhuman quality, or that like of a normal human beings. Odysseus's physical strength is one of his most remarkable and powerful qualities, which we come to learn of. ...read more.

This great strength, which Odysseus possessed, was certainly beyond that of normal humans, as demonstrated in these examples and when the suitors failed to string and draw the bow as Odysseus displayed. Therefore, we may conclude that this quality is that in the nature of a 'Superman's' as it is far greater than would normally be so. Odysseus also possessed other qualities, which were demonstrated within the novel. Apart from being the strong and powerful character, which he certainly was, he also had a softer, more timid side. Take for example the chapter in which Odysseus must talk with the ghosts of the dead in Hades. Here, Odysseus experiences panic and fright with what he must endure, as the underworld is that of a dismal and gloomy place. Book XI 'The Book Of The Dead' 'From this multitude of souls, as they flustered to and fro by the trench, there came a moaning that was horrible to hear. Panic drained the blood from my cheeks.' ...read more.

From these observations and presumptions of the novel 'The Odyssey', I have found that Odysseus, the brave warrior who fought at Troy, and endured the callous ventures of his misfortunate voyage home, may be one of a diverse character. There is the side of him, which is the superiorly strong and brave fighter; capable of facing and conquering some of the most horrific and atrocious situations one must endure. This may be classified as a quality like that of a superhuman, one of which is that or greater than a normal humans. Then there is the softer and more emotional side, to which Odysseus demonstrates his feeling of compassion and desire, which may be noted as characteristics which are not like that of a superhuman, which I have established as like that of a normal human beings. From this we can conclude, that Odysseus, not only had qualities like that of a superman, but also possessed emotions and desires like that of a normal person. ...read more.