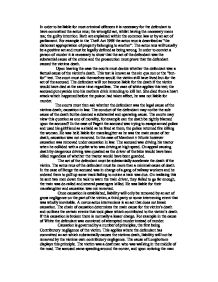 In order to be liable for most criminal offences it is necessary for the defendant to have committed the actus reus; the wrongful act, whilst having the necessary mens rea; the guilty intention. Both are explained within the common law or by an act of parliament. For example in the Theft Act 1968 the actus reus is described as "the dishonest appropriation of property belonging to another". The actus reus will usually be a positive act and must be legally defined as being wrong. In order to convict a person of murder it is necessary to show that the act of the defendant was the substantial cause of the crime and the prosecution must prove that the defendant caused the victims death. Upon hearing the case the courts must decide whether the defendant was a factual cause of the victim's death. This test is known as the sin qua non or the "but-for" test. The court must ask themselves would the victim still have lived but-for the act of the accused. The defendant will not become liable for the death if the victim would have died at the same time regardless. The case of white applies this test; the accused put cyanide into his mothers drink intending to kill her. She died from a heart attack which happened before the poison had taken affect, he was not liable for murder. ...read more.

In the case of Blaue the accused stabbed the victim through the heart and liver 19 times, a blood transfusion was needed to save her life, however the victim was a Jehovah's witness and refused on religious grounds. The accused was liable for her death. In the case of Hayward the accused threatened his wife in a drunken rage. She was in so much fear she ran out into the street and collapsed and died. She had an over-active thyroid gland which made her susceptible to over activity. The accused was liable for her manslaughter. The case off Mckechnie also applied this principle of causation. Another principle applied to causation is the escape of the victim. This occurs where the defendant has behaved in such a way that his victim is put in fear and thus tries to escape; causation will not be removed if death occurs as a result unless the defendant has been grossly negligent. In the case of Pitts the victim was in fear of one accused and jumped from a bridge into a river and drowned. Causation was not removed. In the case of Roberts, the daftness test was created. The accused gave a lift to a girl in his car; he told her to undress and then tried to remove her top. ...read more.

Within causation the broad concerns of a modern multi-cultural society are considered as the law takes into account religious beliefs as in the case of Blaue where the wishes of a Jehovah's Witness where considered. Even when causation is broken, the defendant may still be charged with a non-fatal assault. However there are also several disadvantages to the rules concerning causation. Firstly the courts are very reluctant to break causation which can be harsh on the defendant as some could suggest in the case of Blaue. Also the defendant may still be liable where the victim refuses medical treatment which could have saved their life as in Blaue. Some academics have argued in such circumstances the charge should be reduced to one of grievous bodily harm (S.8) where ultimately the sentence would still be up to life. It is also suggested that it is unfair to convict a defendant where the wounds he inflicted were almost healed but then significantly worsened by a member of the medical profession as in the case of Cheshire. Ultimately once the defendant has committed the actus reus the la takes the view that h will be responsible for all of the consequences that result from that wrongful act. Causation will only be removed by an act of gross negligence on the part of the victim, a third party or intervening event. On grounds of public policy the courts are extremely reluctant to break the link in causation. ...read more.