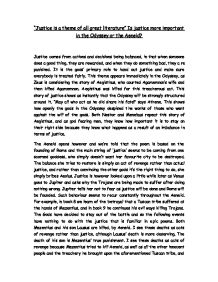 &quot;Justice is a theme of all great literature&quot; Is justice more important in the Odyssey or the Aeneid?

"Justice is a theme of all great literature" Is justice more important in the Odyssey or the Aeneid? Justice comes from actions and decisions being balanced, in that when someone does a good thing, they are rewarded, and when they do something bad, they are punished. It is the gods' primary role to hand out justice and make sure everybody is treated fairly. This theme appears immediately in the Odyssey, as Zeus is considering the story of Aegisthus, who courted Agamemnon's wife and then killed Agamemnon. Aegisthus was killed for this treacherous act. This story of justice shows us instantly that the Odyssey will be strongly structured around it. "May all who act as he did share his fate!" says Athene. This shows how openly the gods in the Odyssey despised the works of those who went against the will of the gods. Both Nestor and Menelaus repeat this story of Aegisthus, and as god fearing men, they know how important it is to stay on their right side because they know what happens as a result of an imbalance in terms of justice. ...read more.

There's also the case of the unfortunate people in the underworld that must wait 100 years to cross the river, through no fault of their own. Justice really does seem obscure in the Aeneid. Another instance of this is when the people of Carthage feel Dido's death was just, simply because she fell in love with the wrong man, and through no fault of her own. I believe Turnus' death to be the best example of the incomprehensible justice served in the Aeneid. His justice only prevails once they see fit, once it fits in with their plans. In the end, it becomes obvious that while justice is a powerful motivator and regulator in the lives of mortals, it is the will of the immortals that truly controls their lives, and their disfigured system of justice On the other hand, there are moments when actual justice is served. Examples include the groups beyond the river in the underworld and the story of Hercules and the giant for example. He goes to extreme lengths to kill the giant for all the robbery and murder he's committed, and it's just that Hercules puts a stop ...read more.

Odysseus finally returns to find all the suitors and some of the maids running riot in his home, having raunchy s*x, eating all the food, and drinking away his wealth. Odysseus is of course a bit bothered by this, so he decides, and Athene, who borrows Mentor's image again, agrees that he, Telemachus and a couple of close friends will pick up their weapons and launch them through any part of the suitors they see fit. The fact that Athene helps proves that the act is just. Rarely do gods help out in a way that we can perceive as just in the Aeneid, because most of the time, the punishments are just vicious or over-exaggerated. So anyway, Telemachus sees to it that the ill-mannered maids are hung until they stop twitching, and Odysseus destroys all the suitors so that he and Penelope can live happily ever after, as they justly deserve. By the end of homer's poem, everyone has been served the justice they've earned, both good and bad. I think it's fair to say that justice is very important in both plays, but as a modern day reader, it's easier to understand the justice in the Odyssey because at times, the events in the Aeneid seem so obscure. ...read more.