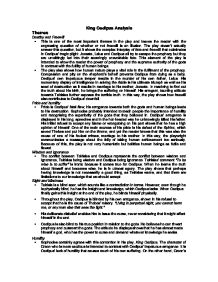 King Oedipus Analysis Themes Destiny and Freewill * This is one of the most important themes in the play and leaves the reader with the engrossing question of whether or not freewill is an illusion. The play doesn't actually answer this question, but it shows the complex interplay of fate and freewill that culminates in Oedipus' tragic plight. Jocasta, Laius and Oedipus all try to escape the prophecy but they are unwittingly led into their seemingly unavoidable fate. This element of the play is intended to show the reader the power of prophecy and the supreme authority of the gods in contrast with the futility of human beings. * The play also shows how human nature plays a vital role in the fulfilment of the prophecy. Compassion and pity on the shepherd's behalf prevents Oedipus from dying as a baby. Oedipus' own impetuous temper results in the murder of his own father, Laius. His momentary display of intelligence in solving the riddle is his ultimate triumph as well as his seed of destruction as it results in marriage to his mother, Jocasta. In resolving to find out the truth about his birth, he brings the suffering on himself. His arrogant, taunting attitude towards Teirisias further exposes the terrible truth. In this way, the play shows how freewill also contributes to Oedipus' downfall. Pride and humility * Pride is Oedipus' fatal flaw; his arrogance towards both the gods and human beings leads to his destruction. ...read more.

The attitude he displays shows that he has almost made himself a god, who has the power to curse and demand whatever knowledge he seeks. Humility * Sophocles certainly agrees with this contention in his play, King Oedipus. The character of Creon who is more cautious is intended to contrast with Oedipus' impetuous arrogance. It is Oedipus' lack of humility that causes much of his own suffering. On the other hand, Creon's more careful approach to life evades a potentially disastrous situation when Oedipus accuses him of conspiracy. Characters Oedipus * Oedipus is willing to help the people of Thebes. "I would gladly do anything to help you." * He is actively involved with his city. "I have not thought it fit to rely on my messengers, but am here to learn for myself..." * Arrogant - proud of his own abilities such as solving the riddle of the sphinx. "Until I came - I, ignorant Oedipus, came - and stopped the riddler's mouth, guessing the truth by mother-wit, not bird-lore." * Sympathetic towards the city of Thebes - "I grieve for you my children. Believe me, I know all that you desire of me, all that you suffer; and while you suffer none suffers more than I." * Jumps to conclusions about the ones closest to him. He accuses Creon of conspiring to take over the throne. ...read more.

Shepherd * Like Teiresias to impart his knowledge until threatened. Oedipus terrorizes, "Answer! If I must speak again, you die!" He also serves to confirm Oedipus' greatest fears. Chorus * Represents the voice of the elders as well as the general public. It comments on the action in the play, sometimes siding with Oedipus, other times questioning his actions and words. * They are the voice of religious belief, more than once urging the need to heed the words of the gods. "I only ask to live, with pure faith keeping in word and deed that Law which leaps the sky, made of no mortal mould...whose living godhead does not age or die." * It is at times philosophical, commenting on the nature of existence and the frailty of human attainment and success. "All the generations of mortal man add up to nothing! Show me the man whose happiness was anything more than an illusion followed by disillusion. Here is the instance, here is Oedipus, here is the reason why I will call no mortal creature happy... Then learn that mortal man must always look to his ending. And none can be called happy until that day when he carries his happiness down to the grave in peace." Symbols Sight and blindness - this is used as a metaphor for knowledge and ignorance. Context * The play was written during the Classical period in Ancient Greece in the 5th century BC, a time of optimistic humanism. Sophocles tends to celebrate humanity but also plea for adherence to justice, moderation and the gods. ...read more.