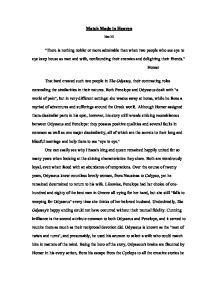 Match Made in Heaven.

Match Made in Heaven Nan Ni "There is nothing nobler or more admirable than when two people who see eye to eye keep house as man and wife, confounding their enemies and delighting their friends." Homer That bard created such two people in The Odyssey, their contrasting roles concealing the similarities in their natures. Both Penelope and Odysseus dealt with "a world of pain", but in very different settings: she wastes away at home, while he faces a myriad of adventures and sufferings around the Greek world. Although Homer assigned them dissimilar parts in his epic, however, his story still reveals striking resemblances between Odysseus and Penelope: they possess positive qualities and several faults in common as well as one major dissimilarity, all of which are the secrets to their long and blissful marriage and help them to see "eye to eye." One can easily see why Ithaca's king and queen remained happily united for so many years when looking at the shining characteristics they share. Both are wondrously loyal, even when faced with an abundance of temptations. Over the course of twenty years, Odysseus knew countless lovely women, from Nausicaa to Calypso, yet he remained determined to return to his wife. ...read more.

her own longing for attention - after all, Penelope is a woman whose husband has been gone for more than twenty years. She succeeds in accomplishing both: After she descends the stairs, "the suitor's knees went slack, their hearts dissolved with l**t" and they showered her with "gorgeous presents." Homer seems to reiterate this fact that Penelope enjoyed the courtship of so many fine, young princes, even though her suitors were a burden and a plague to the household. Book 19 includes a passage describing a dream Penelope had, in which an eagle, which later reveals himself as Odysseus, destroys her flock of geese by "snap[ping] their necks and kill[ing] them one and all", the geese obviously symbolizing her gaggle of suitors. Penelope is comforted by this dream and seems to hope that it foreshadows future events, but also acknowledged that she "wept and wailed" and was "sobbing, stricken" at the slaying of her geese. Hence, though Penelope does remain honorable and is faithful to Odysseus during the twenty years when they were apart, she still, perhaps subconsciously, fostered a desire to do otherwise. However, Penelope's slight interest in her suitors may not be a have been such a bad thing; on the contrary, it could have inspired her to forgive her husband more easily if he ever told her of his dalliances with goddesses. ...read more.

Penelope didn't put her teenage son in his proper place, opting instead to meekly withdraw to her own quarters. Had Telemachus spoken similar words to his father, Odysseus's ego certainly wouldn't have allowed such a lack of reverence, and Telemachus most likely would have received some tough love at his hands. Pride is the only significant distinction between the characters of Odysseus and Penelope, but it is a meaningful difference as well. If Ithaca's queen was as self-righteous as its king, one could expect many royal family squabbles instead of the marital bliss they are famed for. Penelope is modest and demure, attributes that are absolutely necessary in order to live in harmony with a proud man like Odysseus. In conclusion, Odysseus and Penelope are alike in almost every respect, with their good qualities holding them together, their faults leading to understanding, and their one dissimilarity producing compatibility. That is why they were able to build the strongest kind of love, the love described in I Corinthians 13:7 : " Love never gives up, never loses faith, is always hopeful, and endures through every circumstance." The Odyssey itself is a testimony to this kind of bond between husband and wife, a bond forged by harmonious natures, able to survive through twenty years of separation, temptation, and suffering. ...read more.