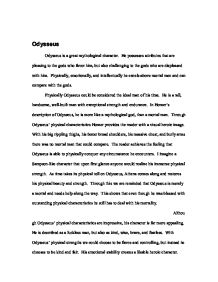 Odysseus. Although Odysseus physical characteristics are impressive, his character is far more appealing. He is described as a luckless man, but also as kind, wise, brave, and fearless

Odysseus Odysseus is a great mythological character. He possesses attributes that are pleasing to the gods who favor him, but also challenging to the gods who are displeased with him. Physically, emotionally, and intellectually he excels above mortal men and can compare with the gods. Physically Odysseus could be considered the ideal man of his time. He is a tall, handsome, well-built man with exceptional strength and endurance. In Homer's description of Odysseus, he is more like a mythological god, than a mortal man. Through Odysseus' physical characteristics Homer provides the reader with a visual heroic image. With his big rippling thighs, his boxer broad shoulders, his massive chest, and burly arms there was no mortal man that could compare. ...read more.

This shows that even though he was blessed with outstanding physical characteristics he still has to deal with his mortality. Although Odysseus' physical characteristics are impressive, his character is far more appealing. He is described as a luckless man, but also as kind, wise, brave, and fearless. With Odysseus' physical strengths we could choose to be fierce and controlling, but instead he chooses to be kind and fair. His emotional stability creates a likable heroic character. The reader is pulling for Odysseus to succeed and win his internal and external battles. Although he faces many trials, he never has an unfair word or action. ...read more.

Odysseus also possesses wisdom, and good sense within. Wisdom is Odysseus' greatest gift because it provides him with better judgment in every situation. Not possessing good sense and wisdom can cause his life to take a fatal turn in the wrong direction. Odysseus was successful in making his journey home to Ithaca because of this amazing gift of wisdom. Odysseus is an extremely versatile individual possessing outstanding characteristics physically, intellectually, and emotionally. His heroic actions throughout his many journeys prove him to be a man of true character. " In mythology and legend, a man or woman, often of divine ancestry, who is endowed with great courage and strength, celebrated for his or her bold exploits, and favored by the gods is a true hero." Therefore Odysseus is the perfect example of a mythological hero. ...read more.