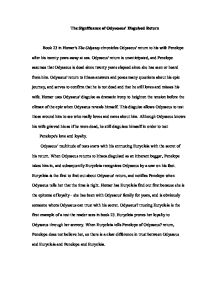 The Significance of Odysessus' Disguised Return Book 23 in Homer's The Odyssey chronicles Odysseus' return to his wife Penelope after his twenty years away at sea. Odysseus' return is unanticipated, and Penelope assumes that Odysseus is dead since twenty years elapsed since she has seen or heard from him. Odysseus' return to Ithaca answers and poses many questions about his epic journey, and serves to confirm that he is not dead and that he still loves and misses his wife. Homer uses Odysseus' disguise as dramatic irony to heighten the tension before the climax of the epic when Odysseus reveals himself. This disguise allows Odysseus to test those around him to see who really loves and cares about him. Although Odysseus knows his wife grieved his as if he were dead, he still disguises himself in order to test Penelope's love and loyalty. ...read more.

Penelope sleeps through Odysseus? slaughter of the suitors, which, had she been awake, would be strong evidence that he is her husband. Homer purposely has Penelope sleep through this whole ordeal to heighten the action and suspense; the reader knows that Penelope will eventually wake up and face Odysseus, and that the killing will not be disregarded - there must be resolution. Penelope is initially skeptical when Eurycleia tells her about Odysseus' return: "dear old nurse, the gods have made you mad. They have unhinged you, and you were once so sane. Why do you mock me?--haven't I wept enough?" (11-16). She says this under the impression that the gods are trying to play a trick on her. Penelope knows that it is against her better judgment to think of Odysseus as alive, so when she sees Odysseus, she cannot help her disbelief. ...read more.

Odysseus' return answers the paramount question of whether he would return and confirms the fact that he is still alive and that his love for Penelope is still alive as well. Odysseus? disguise allows him to test Eurycleia?s loyalty and to return home without Penelope knowing so that he can test the authenticity of her loyalty and love. Throughout book 23 there is are two palpable, burning questions: whether Penelope will recognize Odysseus if/when he reveals himself, and whether Eurycleia and Penelope will prove themselves to be the loyal family Odysseus left twenty years before. The buildup of tension gets resolved from the unveiling of Odysseus' disguise. Homer uses the theme of disguise as a device to reveal characteristics that are not readily apparent from the story alone. In this case, light is shed on Penelope and how she copes with Odysseus' absence and return. ...read more.