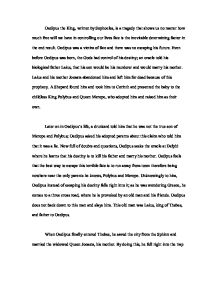 Oedipus the King, written by Sophocles, is a tragedy that shows us no matter how much free will we have in controlling our lives fate is the inevitable determining factor in the end result.

Oedipus the King, written by Sophocles, is a tragedy that shows us no matter how much free will we have in controlling our lives fate is the inevitable determining factor in the end result. Oedipus was a victim of fate and there was no escaping his future. Even before Oedipus was born, the Gods had control of his destiny; an oracle told his biological father Laius, that his son would be his murderer and would marry his mother. Laius and his mother Jocasta abandoned him and left him for dead because of this prophecy. A Shepard found him and took him to Corinth and presented the baby to the childless King Polybus and Queen Merope, who adopted him and raised him as their own. ...read more.

This old man was Laius, king of Thebes, and father to Oedipus. When Oedipus finally entered Thebes, he saved the city from the Sphinx and married the widowed Queen Jocasta, his mother. By doing this, he fell right into the trap the Gods lay out for him. This just proved that he was just a toy, which the Gods used for their own amusement. When Thebes was afflicted with the plague, Oedipus had his brother in-law and uncle, Creon go to Delphi to ask Apollo to lift the plague. When Creon returned he said that the reason for the plague was that the murderer of King Laius had not been brought to justice. Right away Oedipus curses the killer, but unwittingly curses himself. ...read more.

This last act of self-mutilation was caused by Oedipus' free will, but his fate and destiny came from the Gods, for what seemed to be for their own self-amusement. In the end, Oedipus finally realizes that his destiny could not of been changed no matter where he ran or what he did. Oedipus accepts that fact that the Gods have been using him as a toy as he tells Creon that, "The gods hate no man more than me!" His whole life he ran away from his own fate, but in the end it was this running that brought him right into it. Oedipus was guilty of murdering his father and marrying his mother, but perhaps his true crime lay in the fact that his vanity caused him to attempt to raise himself to the level of the Gods by escaping his destiny. ...read more.