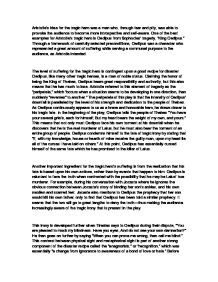 One of the best examples for Aristotles tragic hero is Oedipus from Sophocles tragedy, King Oedipus.

Aristotle's idea for the tragic hero was a man who, through fear and pity, was able to provoke the audience to become more introspective and self-aware. One of the best examples for Aristotle's tragic hero is Oedipus from Sophocles' tragedy, "King Oedipus." Through a framework of carefully selected preconditions, Oedipus was a character who represented a great amount of suffering while serving a communal purpose to the audience, as Aristotle intended. The level of suffering for the tragic hero is contingent upon a good recipe for disaster. Oedipus, like many other tragic heroes, is a man of noble status. Claiming the honor of being the King of Thebes, Oedipus bears great responsibility and authority, but this also means that he has much to lose. Aristotle referred to this element of tragedy as the "peripeteia," which "occurs when a situation seems to be developing in one direction, then suddenly "reverses" to another." ...read more.

It seems that the two will go to great lengths to deny the truth-thus making the audience increasingly aware of the tragic irony that is present in the play. This irony is developed further when Tiresias says to Oedipus during their dispute, "You are pleased to mock my blindness. Have you eyes, And do not see your own damnation?" He then goes on further by saying "When you can prove me wrong, then call me blind." This contrast between physical sight and metaphorical sight is part of another strong component of the disaster recipe called the "anagnorisis," or "recognition," which was essentially "a change from ignorance to awareness of a bond of love or hate." Before Oedipus realizes his fate, he is considered by Tiresias to be metaphorically blind. However, after Oedipus realizes his fate, he gouges his eyes out, thus gaining metaphorical sight in favor of physical sight. Possibly one of the most important ingredients for the downfall of the tragic hero lies in the "catharsis," or the "purification," of the emotions of pity and fear. ...read more.

Aristotle best described the tragic hero as "such a person who neither is superior [to us] in virtue and justice, nor undergoes a change to misfortune because of vice and wickedness, but because of some error, and who is one of those people with a great reputation and good fortune." Oedipus is a tragic hero because he is a man who is neither good nor evil, and whose downfall is based upon his own actions. Oedipus invokes pity and fear upon the crowd for being a character whom we can both relate to, while understanding the contrast between our average lives and Oedipus' noble status, and how it adds to the intensity of Oedipus' downfall. We see Oedipus lose his physical sight in favor of metaphorical sight which reveals his fate. Perhaps these tragic elements can be best summarized by the closing words in "King Oedipus": "Then learn that mortal man must always look to his ending, And none can be called happy until that day when he carries his happiness down to the grave in peace." ...read more.