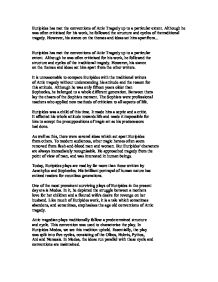 One of the most prominent surviving plays of Euripides in the presentday era is Medea. In it, he depicted the struggle between a motherslove for her children

As such Euripides has used a chorus in his play to represent the Corinthian women. However, in other tragedies, the chorus played a much mor, detached role. They were important as narrators of commentators to what was actually occurring. But in Euripides play, they have a more prominent interaction with the main characters, especially that of Medea. Medea and the chorus engage in long conversations concerning her plight and her plan of revenge. Thus, we can see that Euripides sometimes followed conventions. The tragedian stage convention in Attic theatre also followed a specific rule. There were never more than three characters on the stage at one time. By studying Medea, we can see that Euripides never has more than three actors on stage and upholds the tradition. Therefore, we can see that Erupide's Medea only somewhat follows the conventions of Attic tragedy. Although he was maintained the traditional structure, cycles, and actors, he has replaces some age old ideas and themes, including the prominence of gods and the role of the Chorus. But throughout these uses and changes in convention, what really is Euripides trying to express? ...read more.

Women, in the play, are also seen as persuasive, having the ability to achieve their means by begging or supplicating men. Medea is shown as having perfected this ability - every time she is shown attempting to persuade anyone in the play, she succeeds. Women are portrayed as inherently dishonest. This is further emphasised when Medea tells the Chorus: 'We were born women - useless for honest purposes,/ But in all kinds of evil skilled practitioners'. In conclusion, from the play we must assume that women were viewed as s*x crazed, overly emotional, and persuasive beings. However this was the view of Euripides. It is impossible to say what others, particularly women's; views were on women from just this source. The universe in which Euripides existed was not benevolent, or just. Hardship fell on all, the wicked and the good. The gods were not only powerful, but often impulsive, cruel and blind to justice. Needless to say, these positions made Euripides unpopular. He was the unwanted voice of conscience in his age, a man unafraid to point out the lies with which a civilization comforts itself. Sophocles gives us heroes, and Aeschylus gives us a vision of history and teleology; Euripides gives us real men and women with all-too human weaknesses, and his visions are often nightmares. ...read more.