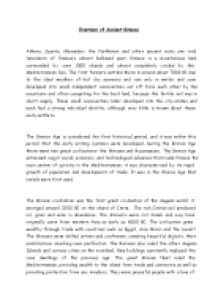 ﻿Overview of Ancient Greece Athens, Sparta, Alexander, the Parthenon and other ancient ruins are vivid reminders of Greece?s almost hallowed past. Greece is a mountainous land surrounded by over 1000 islands and almost completely circled by the Mediterranean Sea. The first farmers settled there in around about 7000 BC due to the ideal weather of hot dry summers and rain only in winter and soon developed into small independent communities cut off from each other by the mountains and often competing for the best land, because the fertile soil was in short supply. These small communities later developed into the city-states and each had a strong individual identity, although very little is known about these early settlers. The Bronze Age is considered the first historical period, and it was within this period that the early writing systems were developed. During the Bronze Age there were two great civilisations- the Minoans and Mycenaeans. The Bronze Age witnessed major social, economic, and technological advances that made Greece the main centre of activity in the Mediterranean; it was characterized by its rapid growth of population and development of trade. It was in the Bronze Age that metals were first used. The Minoan civilization was the first great civilisation of the Aegean world; it emerged around 3200 BC on the island of Crete. ...read more.

This type of government was called democracy. Sparta invaded the neighbouring land of Messenia and forced most of its inhabitants into slavery. To make sure they could control such a large number of slaves, Sparta became a military society. Men and women were expected to be fit and strong. The men were forbidden to have jobs or trade because they were full-time soldiers. Many of the Greek cities joined together when faced with a common enemy. At the beginning of the 5th Century BC Greece was invaded twice by the Persians and even thought the Greeks were outnumbered they were still able to drive the invaders away from their land. From 323-31 BC, the Hellenistic Period was the time from the death of Alexander the Great to the beginning of the Roman Empire. The Greek world was now dominated by large kingdoms ruled by dynasties rather than individual city states. This was a time when Greek influence spread throughout a great deal of the world. The countries that Alexander had conquered adopted the Greek language, religion and styles of art often mixing them with local traditions. Greek towns with gymnasia, temples and theatres were built in all parts of the empire, even as far away as Afghanistan. ...read more.

Stories of the god?s lives were told to children by their mothers and to large audiences by professional storytellers. One key individual of Greece was Alexander the Great. The story of his life sounded more like that of a Greek hero. He was a great military leader and courageous. Many thought he was a descendant of Hercules and another legend claimed he was the son of Zeus. His loyal army would follow him anywhere and he won the respect of the people he conquered. He died aged 33 thousands of miles from home in Macedon with an enormous empire. Another individual was Homer. He was a storyteller and a poet who lived sometime in the 8th century BC. He was greatly admired and created two of the most popular and enduring stories ever told, The Iliad and the Odyssey. Homer?s stories about Mycenae are still told today and reflect real incidents of war, battles and sieges. Drama and theatre were Greek inventions. They held great festivals where plays were performed. At the end of the festival they would choose one of the plays as the winner. The two main types of play performed were tragedy and comedy. Tragedies dealt with terrible events like war or murder. Often they recreated famous Greek myths and legends. A comedy poked fun at current events and people. Many thousands of people would attend these festivals which were dedicated to the god Dionysus. ...read more.