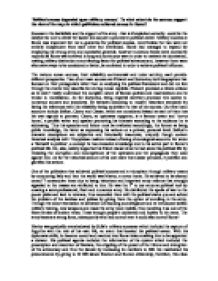 Political success depended upon military success. To what extent do the sources support the view of the ways in which politicians achieved success in Rome?

'Political success depended upon military success.' To what extent do the sources support the view of the ways in which politicians achieved success in Rome? Success in the battlefield and the support of the army -that is if exploited correctly- could be the catalyst for one to climb the ladder and acquire a prominent political career. Military success at Rome was important but not a guarantee for political success, nevertheless the two were not entirely independent from each other but interlinked. Rome had managed to expand by employing his strong army and successful generals; however numerous forces were constantly required as Rome was involved in long and continuous wars in order to maintain its domination, making military distinction a contributing factor for political advancement, however there were alternative ways to be considered or better, be combined in order to achieve political influence. The various roman sources, their reliability controversial and under scrutiny, each provide different prospective. Two of our main sources are Plutarch and Suetonius, both biographers that focused on their protagonists rather than on analysing the political framework and did not live through the events they describe but during roman republic. Plutarch provided a Greek outlook as he didn't really understand the complex nature of Roman politics and machinations and he tended to moralisation. ...read more.

was Pompey who through military success he managed to gain political power without even going through the cursus honorum (the ladder of progress through different magistracies until one became consul later on became conventional law, therefore it became binding for accomplishing a political career). Pompey showed his brilliance by raising an army when only 23 to support Sulla and put down Lepidus and Sertorius revolts, significantly acquiring the title Magnus. He was allowed to bypass the ancient Roman tradition and at when only 35 years old, while not even a senator, he was elected Consul by an overwhelming majority vote. His political agenda included to undo Sulla's reforms as he restored the power of the tribunes lost under Sulla's dictatorship. Nevertheless, during fighting Sertorius at Spain, he faced the lack of proper funding, complaining to the senate, consequently implied that gaining military and maintaining political success depends strongly on someone's interaction with other bodies, as during a war the senate consents to provisions for the soldiers and the assembly ratifies or annuls treaties and peace. Once in 61 BC he returned victorious and triumphant from the 3rd Mithridadic war, he had already managed to establish himself due to military victory As for Crassus, he achieved his political influence through bribery since he was very rich and he ensured to put his own people into positions of power eg. ...read more.

This reinforces the sources that suggest that apart from military success illegal ways were also required. It is no coincident that Rome is regarded as a timocracy as bribery and corruption were obvious ('commit wrong for payment than do right for nothing'-Macer speech) and necessary for political advancement ('bribery excused for the sake of commonwealth') as well intermarriage and amicci, which included political alliance with other clans. Such an example of political alliance was the triumvirate formed to promote Caesars, Crassus and Pompey's mutual aims, 'swearing to oppose all public policies of which any one of them might disapprove' (Suetonius, Divius Julius, 19) and smoothing Pompey and Crassus hostile relationship as all 3 of them rose to power through it. In essence it was aimed against the Optimates since they dominated the Senate, the true governor of Rome that one had to overthrow in order to gain absolute power. This had been an uneasy alliance based purely on interests and political convenience and once it outlived its usefulness it collapsed. Moreover the building block of one's political career was the patronage allowing the nobles to maintain their influence and control the elections. Patrons would advance and protect the interests of their clients and in return the clients voted according to their patron's decision in the assembly. It was subservient, nonetheless, this was one of the ways Rome maintained its empire, by controlling its provinces through personal relations and entourages. ...read more.