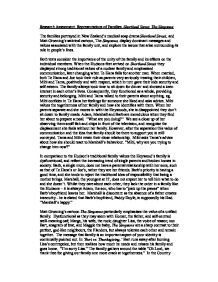 Research Assessment. Representations of Families. Shortland Street, The Simpsons The families portrayed in New Zealand's medical soap drama Shortland Street, and Matt Groening's satirical cartoon, The Simpsons, display dominant messages and values associated with the family unit, and explore the issues that arise surrounding its role in people's lives. Both texts consider the importance of the unity of the family and its effects on the individual members. When the Hudsons first arrived on Shortland Street they displayed strong traditional values of a nuclear family and emphasised communication, later changing when Te Hana falls for another man. When married, both Te Hana and Joe took their role as parents very seriously treating their children, Mihi and Tama, positively and with respect, which in turn gave their kids security and self esteem. The family always took time to sit down for dinner and showed a keen interest in each other's lives. Consequently, they functioned as a whole, providing security and belonging. Mihi and Tama talked to their parents about anything. eg. Mihi confides in Te Hana her feelings for someone she liked and asks advice. Mihi values the togetherness of her family and how she identifies with them. When her parents separate and she moves in with the Heywoods, she is disappointed they don't sit down to family meals. ...read more.

"I'm sorry Lisa." The family gathers around the table "Oh Lord, we thank thee for giving our family one more crack at togetherness." In the Country Club episode, Marge realises that her family is a part of who she is and she is proud of them. "Homey, I like your in-your-face humanity. I like the way Lisa speaks her mind. I like Bart's- I like Bart." Another dominant message associated with families is the importance of parental authority to give boundaries and control. In the initial Hudson family the kids were well disciplined, always helping with chores around the house. eg. Cooking, taking out the rubbish etc. Their parents provide role models of dedication but sometimes their strong ambitions for Mihi and Tama placed them under pressure to measure up. Tama played rugby not for himself but for Joe's desire to turn him into a sports hero. He wore his Dad's old shoes so as not to disappoint. Mihi was prohibited from being friends with Shannon, deemed by her parents to be a 'bad influence.' Seeking independence from this control she begins to rebel with Shannon. eg. She is caught smoking behind the school. Eventually she realises her mother's point and straightens out. "You're school work is suffering." Marshall's only father figure is Adam, his older brother. ...read more.

"I can't believe your taking him back like nothing happened... I won't be here to pick up the pieces." Homer, in The Simpsons, is constantly faced with choosing between himself and his family, and unlike Te Hana and Barb always chooses the latter, overcoming any selfishness and making necessary changes to be committed, and successfully emphasising the importance of making self sacrifices for your family. In 'War of the Simpsons,' Homer goes fishing at a marriage retreat. When Marge is outraged, Homer throws back his 'General Sherman,' showing devotion to his marriage and kids. "I gave up fame and breakfast for our marriage." In 'The Last Temptation of Homer,' Homer almost has an affair with co-worker Mindy, with whom he has a lot in common, but then decides not to be unfaithful to Marge. "Maybe I want to... but then I think about Marge and the kids." Shortland Street and The Simpsons effectively convey dominant messages associated with the representation of families such as the importance of a family's unity, parental roles and whether one always puts their families first. The breakdown of the Hudson's once stable and functional family and the unconventional nature of the Heywood's family in Shortland Street questions whether a traditional nuclear family can ever exist and stay together. The Simpsons on the other hand portray the idea that the family should be retained despite everything, and that perfection is not required to do this, but rather tolerance and self-sacrifice. ...read more.