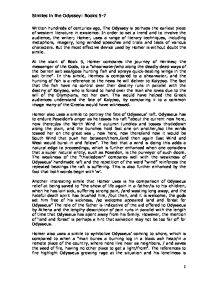 Similes in the Odyssey: Books 5-7

Written hundreds of centuries ago, The Odyssey is perhaps the earliest piece of western literature in existence. In order to set a trend and to involve the audience, the writer; Homer, uses a range of literary techniques, including metaphors, imagery, long winded speeches and trials and tests of various characters. But the most effective device used by Homer is without doubt the simile. At the start of Book 5, Homer compares the journey of Hermes; the messenger of the Gods, to a "shearwater/who along the deadly deep ways of the barren salt sea/goes hunting fish and sprays quick-beating wings in the salt brine". In this simile, Hermes is compared to a shearwater, and the hunting of fish is a reference to the news he will deliver to Kalypso. The fact that the fish have no control over their destiny runs in parallel with the destiny of Kalypso, who is forced to hand over the man she loves due to the will of the Olympians, not her own. ...read more.

Odysseus by Athena and the lengthy description of pain runs in parallel with the length of time that Odysseus has spent away from his family. However, the mention of 'land and forest' is perhaps a hint that salvation may not be too far off for Odysseus. Homer also uses a simile to symbolize Odysseus' coming to shore, which is compared to when a "man buries a burning log in a black ash heap/in a remote place of the country, where none live near as neighbors, / and saves the seed of fire, having no other place to get a light/from". The references to fire highlight Odysseus growing rage at the situation and his loneliness is emphasized the reference to "none" living near as neighbors. This, combined with the lack of light helps to paint a dark picture and give a deep insight into the mind of Odysseus. Homer also uses a simile to glorify the beauty of Nausikaa, and to contrast her beauty to that of her handmaidens. ...read more.

/And as when a master craftsman overlays gold on silver, / and he is one who was thought by Hephaistos and Pallas Athene/in art complete, and grace is on every work he finishes, /so Athene gilded with grace his head and his shoulders, / and he went a little aside and sat by himself on the seashore,/radiant in grace and good looks". Odysseus is compared to a piece of fine art, which has been overlaid with "gold on silver", and this is perhaps also indicative of his new found confidence and determination, as well as his physical attributes. However, there are no such similes present in Book 7. This may be due to the fact that Homer does not wish to describe the surroundings or characters in any great detail, since they may not have any great bearing to the remainder of the play. Also, Homer may feel that a lack of similes may give the reader a chance to use their own imagination and draw their own interpretations. ?? ?? ?? ?? Similes in the Odyssey: Books 5-7 1 ...read more.