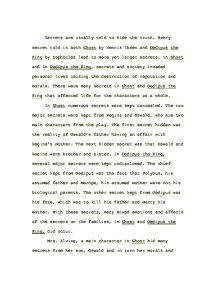 The affects of secrets as seen in 'Ghost' and 'Oedipus the King'.

Secrets are usually told to hide the truth. Every secret told in both Ghost by Henrik Ibsen and Oedipus the King by Sophocles lead to more yet larger secrets. In Ghost and in Oedipus the King, secrets and society invaded personal lives causing the destruction of reputation and morals. There were many secrets in Ghost and Oedipus the King that affected life for the characters as a whole. In Ghost numerous secrets were kept concealed. The two major secrets were kept from Regina and Oswald, who are two main characters from the play. The first secret hidden was the reality of Oswald's father having an affair with Regina's mother. The next hidden secret was that Oswald and Regina were brother and sister. In Oedipus the King, several major secrets were kept undisclosed. The chief secret kept from Oedipus was the fact that Polybus, his assumed father and Merope, his assumed mother were not his biological parents. The other secret kept from Oedipus was his fate, which was to kill his father and marry his mother. With these secrets, many mixed emotions and affects of the secrets on the families, in Ghost and Oedipus the King, did occur. ...read more.

When all his secrets were exposed, his morals and personal life were viewed differently by society. A king is supposed to be an exemplar for his kingdom. A king is not supposed to be a murderer. If a king is a murderer, he could possibly be looked down upon, exiled, or even put to death. When Oedipus proclaimed, "I this countries reigning king shall sever from all fellowship of speech and shelter sacrifice, and sacrament, Even ritual touch of water, in this realm thrust out from every home well be the very picture of that pestilence he brought upon our city."(pg 15) he was proclaiming his morals. He meant he would kill the person who killed Laius and brought the whole city a deadly plague. Oedipus's personal life was brought to a halt as soon as his secrets were known. Society looked down on him, his wife killed herself, and he became blind. Jocasta was another main character in Oedipus the king, and she was affected by the secrets exposed. She believed her husband was innocent and that he didn't commit any crime. ...read more.

Altogether Ghost by Henrik Ibsen and Oedipus the King by Sophecles were similar dealing with secrets, secrets in Ghost and Oedipus the King made up the excitement and suspense in the plays. Numerous secrets have penalty like the affects of the secrets on Oedipus and Mrs. Alving. Both plays were exceptional, leading the reader to contemplate if it is a good idea to tell secrets and if secrets cause harm to friendships, or maybe to family or even mar morals and character seen by society. Therefore, secrets have numerous affects on many just like the affects it had on the families in Ghost and Oedipus the King. Secrets told can affect the way the public views a person. Secrets also invade personal lives causing humiliation and the obliteration of reputations and morals. These affects on the family can cause negative situations such as withdrawal and repulsion, but some secrets turn out to have positive affects, for example Regina ended up leaving and starting her life over again when she was told that Oswald and her were siblings. Secrets are used to hide the truth and can affect life as a whole. ...read more.