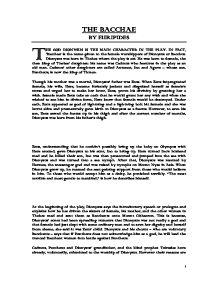 The Bacchae by Euripides - summary

THE BACCHAE BY EURIPIDES T HE GOD DIONYSUS IS THE MAIN CHARACTER IN THE PLAY. IN FACT, 'Bacchae' is the name given to the female worshippers of Dionysus or Bacchus. Dionysus was born in Thebes where the play is set. He was born to Semele, the then king of Thebes' daughter; his name was Cadmus who features in the play as an old man. Cadmus' other daughters are called Autonoe, Ino and Agave - whose son, Pentheus, is now the king of Thrace. Though his mother was a mortal, Dionysus' father was Zeus. When Zeus impregnated Semele, his wife, Hera, became furiously jealous and disguised herself as Semele's nurse and urged her to make her lover, Zeus, prove his divinity by granting her a wish. Semele made Zeus take an oath that he would grant her any wish and when she wished to see him in divine form, Hera knew that Semele would be destroyed. Under oath, Zeus appeared as god of lightning and a lightning bolt hit Semele and she was burnt alive and prematurely gave birth to Dionysus as a foetus. However, to save his son, Zeus sewed the foetus up in his thigh and after the correct number of months, Dionysus was born from his father's thigh. ...read more.

Therefore Demeter (food) and Dionysus (wine) must be worshipped. Teiresias finishes with a prophecy; he says that Pentheus should use wisdom instead of force towards Dionysus, as the whole of Greece will soon be worshipping him. Cadmus reminds Pentheus of Actaeon who claimed to be a better hunter than Artemis herself, who, to punish the foolish Actaeon, turned him into a stag and he was devoured by his hounds. Pentheus dismisses all of the above as lunacy and demands for Teiresias' augury to be destroyed - an act of sacrilege - and for a search party to be sent to find the 'priest of Dionysus' so that he can be brought back to the city and stoned to death. The guards bring Dionysus to Pentheus and they say that he offered himself for arrest and when he was, the fetters fell off of the imprisoned Bacchants and they have escaped which shows that the priest can make miracles happen. Pentheus comments on the priest's beauty and effeminate features, however, he threatens to cut off his hair, sacred to Dionysus and take away his Thyrsus. He then asks what the secret rites are of the cult of Dionysus, when he priest says that the happen at night and won't tell him what they are, Pentheus claims that women are committing promiscuity under the cover of night. ...read more.

The Chorus mock her. However, her father Cadmus then in stichomythia tells her that it is in fact her son that she killed and the suspense created by stichomythia finally leads Agave to realise that her punishment for not recognising Dionysus was to be the murderess of her own son - filicide. Cadmus then mourns his grandson who has been brought on piece by piece as he and his grandson loved one another very much. In fact Cadmus used to be asked regularly by Pentheus if there was anyone upsetting him and Pentheus would deal with them on his grandfather's behalf. Cadmus is the only character that the Chorus feel sorry for. The Deus Ex Machina: Dionysus says that Pentheus' punishment was just and that Agave and her sisters are polluted by the death of Pentheus and are therefore exiled. Cadmus and his wife Harmonia will be exiled too and turned into snakes. In this form they will lead barbarians in wars and desecrate the shrine of Apollo. Then however, Ares, Harmonia's father, will rescue from this state and grant them immortal life amongst the gods. Cadmus accepts his fate but criticises Dionysus for the harshness of it. The Chorus end the tragedy by saying that human lives are unpredictable and anything van happen - it is all in the hands of the gods. 1 ...read more.