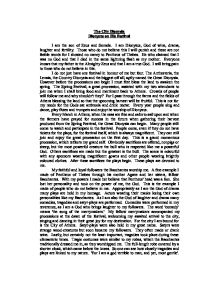 The City Dionysia - Dionysus on His Festival

The City Dionysia Dionysus on His Festival I am the son of Zeus and Semele. I am Dionysus, God of wine, drama, laughter and fertility. Those who do not believe this I will punish and these are not feeble words for I showed no mercy to Pentheus of Thebes. He who claimed that I was no God and that I died in the same lightning flash as my mother. Everyone knows that my father is the Almighty Zeus and that I am a true God. I will bring pain to those who do not believe in this. I do not just have one festival in honour of me but four. The Anthesteria, the Lenaia, the Country Dionysia and the biggest off all, aptly named the Great Dionysia. However before the processions can begin I must first bless the land to awaken the spring. The Spring Festival, a great procession, assisted with my two attendants to join me when I shall bring food and merriment back to Athens. Crowds of people will follow me and why shouldn't they? For I pass through the farms and the fields of Athens blessing the land so that the upcoming harvest will be fruitful. This is not for my needs for the Gods eat ambrosia and drink nectar. Every year people sing and dance, play flutes and trumpets and enjoy the worship of Dionysus. Every March in Athens, when the seas are free and calm to sail upon and when the farmers have prayed for success in the future when gathering their harvest produced from the Spring Festival, the Great Dionysia can begin. Many people still come to watch and participate in the festival. People come, even if they do not have tickets for the plays, for the festival itself, which is always magnificent. They can still join and enjoy the great procession on the first day. This is a grand momentous procession, which reflects my grand self. ...read more.

However it does not matter how good the actors are they will have to wear costumes to make the play breathtaking and authentic. The finest threads will be used for King Oedipus due to the clear fact that he is a king and should be adorned like one. This will not be for long for as soon as he gives up his throne his brother in law, Creon, will be king. I could make the actor playing King Oedipus take of his clothes and give them to Creon. Why should I, for I am a prosperous man and will take no short cuts when it comes to the worship of Dionysus consequently I will pay for another elaborate costume for King Creon. Creon' sons to will be dressed in all the fineries of heirs to the throne. The tragedy is when the two brothers kill each other in battle trying to decide who the successor to the throne is. Besides costumes I will need the ekkylema, which is a trolley wheeled in and out through the central doors. As the ekkylema is used I will have to find two men who will, during the play, wait and wheel it into position. However, what is a play with actors and costumes if there are no audience members to be spectators? Well there will be no problem with sending word out about 'Antigone' and advertising it as word travels fast in Athens. That reminds me, I have to send word about the special occasion, which is just before the festival itself. I will be there with Sophocles and our rivals to give Athens an idea of what is to come. The team of Sophocles and I take along our privileged actors, not wearing their masks and costumes but garlands to make crowds aware of the topic of the play. As this play will be held as the festival Great Dionysia there will be a special throne for the priest of Dionysus where he can sit and watch the plays. ...read more.

We also paint our scenery to create a forest or palace. However more variety in scenery can be achieved because if the opening and closing of the curtains and interlude(s) in the plays. Greeks did not have any breaks in between the plays they performed and with all five actors one can only imagine how exhausting it must have been. In a play scenery is very important it can reinforce the mood of the play and help the actors to convey a better impression of the character he or she is playing. An ekkuklema was used in old times to show dead bodies, which had been killed off scene. No violence was shown in Greek plays. An ekkuklema was either a large platform with normal scenery painted on it as it was used to carry dead bodies off stage or a pivoting platform. Either way the ekkuklema is definitely not used in modern plays. In the larger theatres a tunnel was built under the audience's seats. This was used to roll round stones down it to create the sound of thunder. This technical and ingenious design is definitely not used today as well. Modern technology has allowed us to create these sounds quite simply by recording them and then playing when it is their cue. In Greek comedies the art of flying through the air was common. This shows us that it was a popular and favourite effect. Although the mechanisms have not survived a structure probably similar to a crane was used. This must have involved ropes, pulleys and poles controlled from behind the stage building. Today we also use flying in our plays for example the most famous would have to be Peter Pan and maybe Father Christmas' sledge being pulled by reindeers. The same system of ropes, pulley and poles are still used at present. Some Greeks plays are still held today showing us that plays are still very popular now as in Ancient Greece. It was inevitable that theatres would change due to technology but it is surprising the similarities that still remain after hundreds of years. ...read more.