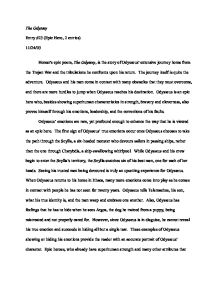 The Odyssey Entry #23 (Epic Hero, 2 entries) 11/24/03 Homer's epic poem, The Odyssey, is the story of Odysseus' extensive journey home from the Trojan War and the tribulations he confronts upon his return. The journey itself is quite the adventure. Odysseus and his men come in contact with many obstacles that they must overcome, and there are more hurdles to jump when Odysseus reaches his destination. Odysseus is an epic hero who, besides showing superhuman characteristics in strength, bravery and cleverness, also proves himself through his emotions, leadership, and the corrections of his faults. Odysseus' emotions are rare, yet profound enough to enhance the way that he is viewed as an epic hero. The first sign of Odysseus' true emotions occur once Odysseus chooses to take the path through the Scylla, a six-headed monster who devours sailors in passing ships, rather than the one through Charybdis, a ship-swallowing whirlpool. ...read more.

Odysseus takes on the role of an intelligent leader in The Odyssey. Odysseus is "never at a loss," and he always seems to know exactly what to do. Odysseus' intuitiveness aids in several unfortunate experiences during his voyages. On one particular occasion, Odysseus and his men are trapped in the Cyclops' cave by a slab of solid rock, and the blinded Polyphemos refuses to let the men leave. Odysseus is quick to come up with a solution to the problem. Each of Odysseus' men hide beneath three of the Cyclops' rams while Odysseus clings to the underside of the biggest ewe. When the Cyclops takes away the stone to let his sheep outside, Odysseus and his men are able to escape. Soon after, Odysseus and his crew must choose between passing the terrifying monster Scylla, who will consumes six occupants of his ship, or the whirlpool Charybdis who will consume the entire ship and crew. ...read more.

This act of haughtiness provokes the Cyclops to throw massive boulders into the sea, interrupting Odysseus' escape. Odysseus and his men successfully escape despite Odysseus' conceit. By the end of this epic poem, Odysseus has learned to keep his arrogance to himself. This change in character becomes apparent when Antinoos, the most outspoken of Penelope's suitors, throws a chair at Odysseus who is disguised as a beggar. Since the chair thrown at Odysseus was Odysseus' chair, the food asked for by Odysseus was Odysseus' food, and the woman Antinoos is competing for was Odysseus' wife, there were several things Odysseus could have told Antinoos that would be interpreted as arrogance. However, Odysseus remained calm because he knew that Antinoos would soon be paid back for all his wrongful doings. Odysseus was truly the epic hero in Homer's The Odyssey. The ability to show and control emotion, the ability to lead his crew through difficult situations, and the ability to recognize and correct his faults are each characteristics of an epic hero. (803) ...read more.