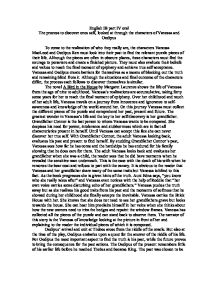 The process to discover ones self, looked at through the characters of Vanessa and Oedipus

English IB part IV oral The process to discover ones self, looked at through the characters of Vanessa and Oedipus To come to the realization of who they really are, the characters Vanessa MacLeod and Oedipus Rex must look into their past to find the relevant puzzle pieces of their life. Although the pieces are often in obscure places, these characters must find the courage to persevere and create a finished picture. They must also evaluate their beliefs and values to reach the final moment of epiphany and achieve true self acceptance. Vanessa and Oedipus create barriers for themselves as a means of blocking out the truth and remaining blind from it. Although the situations and final outcome of the characters differ, the process each follows to discover themselves is similar. The novel A Bird in the House by Margaret Laurence shows the life of Vanessa from the age of nine to adulthood. Vanessa's realizations are accumulative, taking forty some years for her to reach the final moment of epiphany. Over her childhood and much of her adult life, Vanessa travels on a journey from innocence and ignorance to self-awareness and knowledge of the world around her. On this journey Vanessa must collect the different pieces of the puzzle and comprehend her past, present and future. ...read more.

Although Oedipus initially does not believe Theresias he provides him with a new ides that sinks in to his subconscious and awakens his memory. If Oedipus had no been so determined he never would have been able to look at the complete picture of his life. Upon realizing who he really is, Oedipus blinds himself from the world he thought he knew. Although he is literally blind he can see the truth. This is a change from his metaphorical blindness of the truth at the start of the play. In Oedipus the King Sophocles says "the unexamined life is not worth living." Before Oedipus consulted the gods about how to rid Thebes of the plague his life was complete in that he had all that he needed and was living a happy life. But a person cannot live a fulfilled life without understanding their past or who they are. The unexamined life may prove to be more comfortable but the awareness of the examined life is worth the sacrifice. Values and belief play a large role in how Vanessa and Oedipus come to their realizations. Vanessa's beliefs were put upon her by people she lives with. With Harvey Shinwell Vanessa sees the conditions in which he lives and becomes aware of how fortunate she is to live in her grandfather's house. ...read more.

Because Oedipus is forced to solve the riddle of the plague he is forced to solve the riddle of his life. Oedipus' hubristic nature does not allow him to accept the truth. When Teiresias says that he is the reason for the plague he thinks that it is the most absurd thing he has ever heard. Because he thinks he is better that the gods he believes that Terisias, a parallel to the gods, is working with Kreon to get him off the throne. If Oedipus had accepted Terisias' words he would have gone through less pain to find the truth. He has the courage to pursue to truth and even punishes himself showing that he accepts responsibility for his actions. When Oedipus discovers who he is he also realizes his mortal limitations and comes to accept them. In A Bird in the House the reader can assume that Vanessa leads a relatively happy adult life. After the moment of epiphany she is more aware of who she is but does not make drastic changes in her life style. Oedipus however has a completely different life after he discovers who he is. He is exiled from Thebes, alone and blind to the world around him. Despite his misfortunes Oedipus' life is complete. The pieces of these characters past, present and future have come together so that they have a finished picture to look back at. It may have been a difficult process to discover ones self but the end result is rewarding. ...read more.