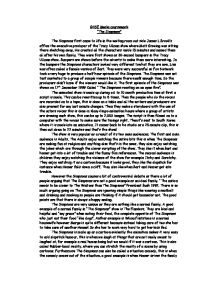 GCSE Media coursework "The Simpsons" The Simpsons first came to life in the waiting room out side James L Brook's office the executive producer of the Tracy Ullman show where Matt Groeing was sitting there sketching away. He created all the characters inside 15 minutes and named them all after his own family. They were first shown as 30-second bumpers in the Tracy Ullman show. Bumpers are shown before the adverts to make them more interesting. In the bumpers the Simpsons characters looked very different to what they are now, Lisa was often called a female version of Bart. They were very successful so Fox Network took a very huge to produce a half hour episode of the Simpsons. The Simpsons was not test marketed to a group of sample viewers because there wasn't enough time. So the producers didn't know if the viewers would like it. The first episode of the Simpsons was shown on 17th December 1989 Called " The Simpsons roasting on an open fire". The animated show is made up during a 6 to 10 month production time at first a script is made. This can be rewritten up to 8 times. ...read more.

This is also called Rubber-band reality, where you can stretch the reality of a scene by using cartoons. Furthermore The Simpsons can also be called a situation comedy, this is when the comedy comes out of the situation, a good example is when Homer drives the family in to wild and the comedy comes from the situation, which is the forest. The normal situations in an episode are usually; the nuclear power house, Mr burns office, the school and The Simpsons home. The Simpsons is funny in very different for example either the violence is funny or it could be the scripting which clever film references are included. However the best ay for me is the slapstick humour and elastic band reality. A good example is when homer fight Bart's new dad and then things get a bit complicating. There are some very strange stereotypes in the Simpsons take Marge she is an extraordinary house wife she does the shopping and takes care of Maggie. Lisa is a clever girl who's a "buff" in school and gets A* all the time, she's quite close to Bart and her mum. Bart who's the typical underachiever boy is hopeless at school. ...read more.

This is because the comparison gives it a good effect, and it makes it more entertaining to see what Homer would do to give the same treatment as Ned would give to his family. A good example is when the Flaunders get a new caravan and Homer gets a second hand one and they end up stuck in the wild. I think that the main reason why the Simpsons has been going on all these thirteen years is because that it is a very funny show and has two target audiences. People are coming home from and watching the Simpsons and saying that my life's not that bad after all. This is called Philologically Human it's when the Simpsons act and feel like humans and Matt Groeing put it "a mental health service to the world". The Simpsons are good and bad role models they are bad because Homer the farther hardly cares about his family and he's just a fat alcoholic potato couch. He is always strangling is son Bart. Bart is also bad because he's an underachiever and proud of it. However sometimes they are good role models like Lisa she an A* student. They all are happy together as a family at the end of each episode and they always say, "I love you". OVERALL the Simpsons love each other and that's what counts. ...read more.