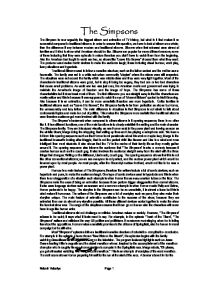 The Simpsons The Simpson is now arguably the biggest sitcom and animation of TV history, but what is it that makes it so successful compared to traditional sitcoms. In order to answer this question, we have to look at sitcom as a whole; then the difference if any between modern and traditional sitcoms. Sitcoms when first released were aimed at families and it tried to show what American should be like. Sitcoms are popular for many different reasons; some of these including that they were episodic in nature therefore you didn't have to watch them from the beginning. Also the American had fought in world war two, so shows like "Leave it to Beaver" showed them what they want. The producer used varies comic devices to make the audience laugh; these including visual humour, word play, funny situations and hyperbole. Traditional Sitcoms used to follow a narrative structure; such as the father worked and the mother was a housewife. The family was set in a white sub-urban community "utopias" where the elders were still respected. The storylines were set around the family which was middle-class and they were very tight together. Most of the characters in traditional sitcoms were good, but to stop it being too sugary, they had one or two bad characters that cause small problems. As world war two was just over, the American media and government was trying to maintain the American's image of freedom and the image of hope. ...read more.

Traditional sitcoms did not challenge or criticize American values or society. However, "The Simpsons" refuses to be quiet; it says what it feels need to say. For example, in the episode "Trash of the Titans", "The Simpsons" satires and criticizes the way US politics and politicians. It condemns mud-slinging when he is telling lies about the oppositions. Homer makes unrealistic promises to the citizens of Springfield, also he has an immoral campaign but he still wins. Most "Simpsons" episodes follow a traditional narrative structure of orientation- complication- conclusion. For example in the episode, I have chosen "New Kids on the Bleech", the episodes begins with the family watching Great Moments In Olympic History on the television. The program features highlights such as Jesse Owens beating Hitler's zeppelin and the oldest marathon winner. Inspired by the accomplishment of the marathon champion who is roughly his age, Homer decides to compete in the Springfield race. Marge rebuts, "Oh please, you get exhausted watching The Twilight Zone marathon." This is an example of wordplay of the word marathon. The next scene shows Homer preparing himself for the run at the start of the race. A banner above him for the marathon reads, "Ruin Your Knees For Charity." After confirming that all his sweatbands and anti-chafe n****e tape are in place, Homer takes his mark. He is ridiculing the latest sport clothes used by professional athletics .At the end of the race, a disguised Bart sneaks ahead of the frontrunners and wins the contest. ...read more.

The crowd is immediately disenchanted with the Party Posse and, once Smash gains control of the ship, jumps off and wades back to shore. Homer and the Party Posse are the only ones left on the ship. They are confused as to where they are going and why they are loading missiles. Millhouse wonders, "The Statue of Liberty! Where are we?" It turns out that Smash plans to blow up MAD Magazine. A dismayed Homer groans, "Not MAD. That's our nation's largest mental illness magazine." Nelson agrees, saying, "Tina Brown was just starting to turn it around". The Party Posse decides that they need the ultimate "chill out song" to calm Smash down. 'N Sync arrives with just that song and some choreography. In the end, the police arrests Lt Smash. "The Simpsons" is so successful because it does something that no other sitcoms does or has done. This is because it is unconventional, it is not afraid to criticize the world and say that no-one is perfect. The Simpsons is well renowned for being unconventional and irregular and this is what makes stand alone. This unconventional make it is a huge target by politics such as George W. Bush Snr who openly criticize the Simpson "Americans should be more like The Waltons than The Simpson". The Simpsons is not bound by reality but the producers still talk about the thing that are important to the audience. This makes the Simpsons closer to audiences heart then traditional sitcoms like "Do it like Beaver" therefore it has been more successful then other sitcoms. ?? ?? ?? ?? Rekesh Vekariya Page 1 ...read more.