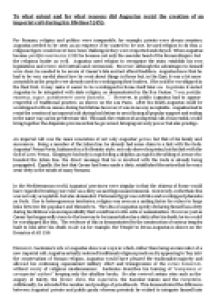 To what extent and for what reasons did Augustus resist the creation of an imperial cult during his lifetime?

﻿To what extent and for what reasons did Augustus resist the creation of an imperial cult during his lifetime? (45)- For Romans, religion and politics were inseparable, for example, priests were always senators. Augustus needed to be seen as an emperor if he wanted to be one, he used religion to do this; a religious figure would never have been challenged, they were respected and obeyed. When Augustus became pontifex maximus in 12 BC he became, not only the saecular head of the Roman Empire, but the religious leader as well. Augustus used religion to reorganise the state, establish his own legislations and revive old festivals and ceremonies. However, although the advantages to himself were clear, he needed to be aware of Caesar?s fate and not offend tradition. Augustus knew that he had to be very careful about how he went about things in Rome but, in the East, it was a lot more acceptable as the people were already used to worshipping their leaders. If he could be worshipped in the East first, it may make it easier to be worshipped in Rome itself later on. In private it suited Augustus to be integrated with state religion, as demonstrated in the Res Gestae; ?I was pontifex maximus, augur, quindecemviri sacris faciundis??. ...read more.

As previously noted, in the Res Gestae, Augustus lists his religious powers and titles; considering that the Res Gestae was effectively an autobiography, it can be inferred that this was received positively as he was satisfied to publish this on stele, it is also evident that the Res Gestae was propaganda designed to influence and so can not be deemed as a reliable, nor objective source. Prompting the creation of an imperial cult would have enshrined Augustus as a deity, given him infinite power to develop his empire and secured his legacy forever. However, it was vital that he treaded the delicate line between paying lip service to Roman conservatism whilst at the same time, attempting to set himself above, and apart from, the average Roman politician. Associating himself with Roman deities was an ideal way of achieving this goal and there is a huge range of evidence that he did very little to resist this. Indeed, it is quite possible that he actually endorsed it. Suetonius describes how he renamed the month Sextilis, to August and therefore ?put? straight? the calendar. Equally, the Horologium Augusti in the Campus Martius, an immense sundial drew attention to Augustus in a manner unavailable to other Romans. ...read more.

Temple to Mars Ultor in the forum of Augustus both underline his connection to the semi-deity Caesar through his completion of filial duty. Horace?s Odes 1.2 similarly shows Augutus as the gods? ?right hand man?. Horace describes the moral decline and religious neglect of the period of civil war and strife and Augustus is called forth to atone for previous sins and to ?aid the crumbling Empire?. Such glowing accounts of Augutus can be explained as many of the poets were convalescing from lost estates from civil war times and, through indirect sponsorship from Augustus, were expected to translate underlying messages of the regime into poetry. Naturally, this kind of blatant worshiping was only acceptable in the abstract medium of poetry, as poetry was known to exaggerate reality and stretch any possible truth. Overall, the weight of evidence tends to suggest that Augustus did not try particularly hard to resist the creation of an imperial cult during his lifetime. Although he showed piety and respect to tradition throughout his reign, his sanctioning and, often encouragement, of provincials worshipping him demonstrated that he wished to be classed as a divine being as it meant that he would have gained all possible power. The creation of an imperial cult resulted in an almost tyrannical rule, where Augustus could not be questioned. ...read more.