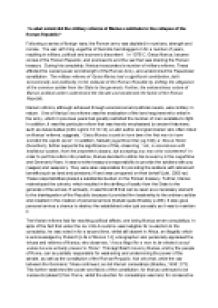 To what extent did the military reforms of Marius contribute to the collapse of the Roman Republic?

﻿To what extent did the military reforms of Marius contribute to the collapse of the Roman Republic? Following a series of foreign wars, the Roman army was depleted in numbers, strength and morale. The war with King Jugurtha of Numidia had dragged on for a number of years, resulting in military, political and economic discontent. In 107B.C, Gaius Marius, became consul of the Roman Republic, and promised to end the war that was draining the Roman treasury. During his consulship, Marius incorporated a number of military reforms. These affected the overall power and strength of the Roman Army, and undermined the Republican constitution. The military reforms of Gaius Marius had a significant contribution, both economically and politically, to the collapse of the Roman Republic by shifting the allegiance of the common soldier from the State to the generals. Further, the extraordinary nature of Marius? political career undermined the Senate and weakened the fabric of the Roman Republic. Marius? reforms, although achieved through economical and political means, were military in nature. ...read more.

The Marian reforms had far reaching political affects, one being Marius seven consulships. In spite of the fact that under the lex Villa Annalis he was ineligible for re-election to the consulship, he was voted in for a second time, whilst still absent in Africa, an illegality which is acknowledged by Plutarch [Life of Marius: 14], a biographer who personally appraised the virtues and reforms of Marius, who observes, ?it was illegal for a man to be elected consul unless he was actually present in Rome?. This significant move by Marius, and by the people of Rome, can be partially responsible for weakening and undermining the power of the senate, as well as the constitution of the Roman Republic. Not only that, while the war between the Germanic Tribes continued, so did Marius? consulships (Bradley, 1990: 273). This further weakened the power and fabric of the constitution, for Marius continued to be inabsentia (absent) from Rome, whilst the election for consulships was held, for consecutive years. ...read more.

After Sulla won the command against the Mithridatic War, Marius returned from Africa with an army, and unleashed a reign of havoc and bloodshed on the city of Rome. During this particular war, the ?fearful? Senate had no authority over the two generals, Marius and Sulla. It is clear that the military reforms of Gaius Marius had a significant contribution, both economically and politically, to the collapse of the Roman Republic by shifting the allegiance of the common soldier from the State to the generals. This shift can be held responsible for the establishment of personal armies and ultimately, the civil war between Marius and Sulla. Further, Marius? seven consulships can be held responsible for weakening the Roman constitution as well as undermining the power of the Senate. In addition, the reform that was associated with the eradication of the land requirement, in order to enlist within the army, placed a hefty burden on the Roman treasury, yet, significantly decreased the rate of unemployment within the Republic. Not only that, Marius, prepared the way for the victories of his more famous successors, Gnaeus Pompeius Magnus and Gaius Julius Caesar. ...read more.