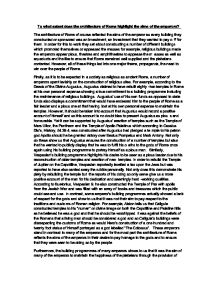 To what extent does the architecture of Rome highlight the aims of the emperors?

To what extent does the architecture of Rome highlight the aims of the emperors? The architecture of Rome of course reflected the aims of the emperor as every building they constructed or sponsored was an investment, an investment that they wanted to pay off for them. In order for this to work they set about constructing a number of different buildings which promoted themselves or appeased the masses for example, religious buildings made the emperors appear pious, theatres and amphitheatres to appease the masses as well as aqueducts and the like to ensure that Rome remained well supplied and the plebeians contented. However, all of these things led into one major theme, propaganda, the need to win over the people of Rome. Firstly, as it is to be expected in a society as religious as ancient Rome, a number of emperors spent lavishly on the construction of religious sites. For example, according to the Deeds of the Divine Augustus, Augustus claimed to have rebuilt eighty-two temples in Rome at his own personal expense showing a true commitment to a building programme including the maintenance of religious buildings. Augustus' use of his own funds as opposed to state funds also displays a commitment that would have endeared him to the people of Rome as a fair leader and a pious one at that having lost at his own personal expense to maintain the temples. ...read more.

Emperors also sought to placate the people with the construction of public bath houses, a task undertaken by many emperors such as Augustus and Titus whom according to Suetonius constructed the Baths of Agrippa and the Baths of Titus respectively. These functioned as important parts of Roman life as it allowed the ordinary people to remain healthy and clean and removed the issue of squalor but they also served as hubs of commerce and business due to their importance as meeting places. There is overwhelming evidence that the architecture of Rome reflected the desire of the emperors to provide entertainment to the Plebeians as the city was dominated by amphitheatres, bath houses and theatres all to ensure the mob did not become unruly. Moreover, many emperors also devoted sections of their building programmes to improving the lives of the ordinary Roman people most notably through the creation of an extensive system of aqueducts which provided the people with clean water. According to Frontinus, Augustus had Agrippa create the Julia aqueduct in his position as overseer of the water supply, a new position, and also to see to the restoration to the Appia, Anio Vetus and Marcia aqueducts. Claudius too is well respected by sources including Suetonius, Frontinus and Pliny the Elder for having constructed the Aqua Claudia and the Anio Novus ...read more.

Clearly all buildings constructed in Rome during the imperial period served as some form of propaganda as a display of the emperor's wealth and power or to appease the people but the construction of buildings to serve only as a mark of propaganda depended upon the rule of the emperor. An emperor who was interested in the people would provide more for them whilst an emperor such as Nero seeking to glorify themselves would seek only to do so with their building projects. In conclusion, it is clear that the architecture of Rome highlights the main aims of the vast majority of emperors of the time period studied. Almost all emperors sought to appease the people with the construction of buildings for public entertainment such as theatres of the Flavian Amphitheatre. Many also sought to present themselves as pious through the construction of religious sites or some sought to appease the masses by improving the infrastructure of Rome. However, some emperors such as Nero due to their personality or style of rule did not do as much for the people as emperors such as Titus or Claudius seeking only to glorify themselves or improve their own standard of living before others. ?? ?? ?? ?? ...read more.