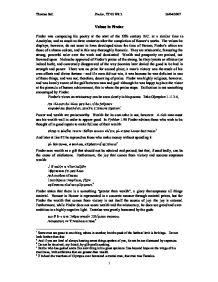 Values in Pindar Pindar was composing his poetry at the start of the fifth century B.C. at a similar time to Aeschylus, and as much as three centuries after the completion of Homer's works. The values he displays, however, do not seem to have developed since the time of Homer; Pindar's ethics are those of a shame-culture, and in this way thoroughly Homeric. They are aristocratic, favouring the strong, powerful ruler over the weak and dominated. Wealth and prosperity are praised, not frowned upon. Nietzsche approved of Pindar's praise of the strong, be they tyrants or athletes (or indeed both), and conversely disapproved of the way Socrates later denied the good to be had in strength and power. There was no prize for second place; a man's victory was the result of his own efforts and divine fortune - and if a man did not win, it was because he was deficient in one of these things, and was not, therefore, deserving of praise. Pindar was highly religious, however, and was keenly aware of the gulf between man and god: although he was happy to place the victor at the pinnacle of human achievement, this is where the praise stops. ...read more.

1 Some men are great in one thing, others in another; but the peak of the farthest limit is for kings. Do not look further than that 2 And if you are fond of always hearing sweet things spoken of you, do not be too distressed by expenses 3 Do not be deceived, my friend, by glib profit-seeking. 4 But he who has gained some fine new thing in his great opulence flies beyond hope on the wings of his manliness, with ambitions that are greater than wealth. 5 If indeed the watchers of Olympus ever honoured a mortal man, that man was Tantalus. 6 C. M. Bowra, Pindar chp. IV. 7 For in wrestling you follow in the footsteps of your mother's brothers. 8 P. 8. 73-5: For many suppose that he who has won good things with no long stretch of toil is the wise man among fools and marshals his life with plans of unerring judgement. 9 And now four times you came down with bodies beneath you, - You meant them harm - To whom the Pythian feast has given No glad home-coming like yours. They, when they meet their mothers, Have no sweet laughter around them, moving delight. In back streets, out of their enemies' way, They cower; for disaster has bitten them. Thomas Bell Pindar, TT 02 Wk 2 29/04/2002 2 ...read more.