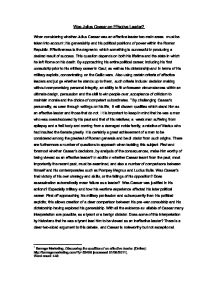 Was Julius Caesar an effective leader?

Was Julius Caesar an Effective Leader? When considering whether Julius Caesar was an effective leader two main areas must be taken into account; his generalship and his political positions of power within the Roman Republic. Effectiveness is the degree to which something is successful in producing a desired result of success. This question depends on both his lifetime and the state in which he left Rome on his death. By approaching his entire political career, including his first consulship prior to his military career in Gaul, as well as his dictatorship and in terms of his military exploits, concentrating on the Gallic wars. Also using certain criteria of effective leaders and judge whether he stands up to them, such criteria include: decision making without compromising personal integrity, an ability to fit unforeseen circumstances within an ultimate design, persuasion and the skill to win people over, acceptance of criticism to maintain morale and the choice of competent subordinates.1 By challenging Caesar's personality, as seen through writings on his life, it will discern qualities which stand him as an effective leader and those that do not. It is important to keep in mind that he was a man who was overshadowed by his past and that of his relatives; a weak man suffering from epilepsy and a frail body and coming from a damaged noble family, a relative of Marius who had insulted the Senate greatly. It is certainly a great achievement of a man to be considered among the greatest of Roman generals and be dictator from such origins. There are furthermore a number of questions to approach when tackling this subject. First and foremost whether Caesar's decisions, by analysis of the consequences, make him worthy of being viewed as an effective leader? In addition whether Caesar learnt from the past, most importantly the recent past, must be examined, and also a number of comparisons between himself and his contemporaries such as Pompey Magnus and Lucius Sulla. ...read more.

was not that he was subverting the Roman constitution... but he was loosening the oligarchy's overbearing grip on it.'12 Caesar through his military campaign in Gaul and his use propaganda undermined the authority of the Senate. He did learn from the past, the brothers Gracchi, two populares tribunes, who had attempted reforms in land ownership to equal distribution, similar to Caesar's own land proposals had been murdered. Caesar, although he did not escape the same fate, avoided it for many years because of his military backing. Whilst he had the support of Pompey in the Senate, and bribed support of tribunes, Curio and Longinus, Caesar was safe from persecution. He adopted his customary approach to reach compromise before using force, but his arrogant approach to the Senate destroyed any moderate support for him.13 He was forced into a dilemma which compromised his personal integrity. Whether to surrender his legions, be tried for his crimes, or act as Sulla had done, cross the Rubicon and take Rome? His instinct following failed negotiations was to fight. He did not try hard enough to persuade the Senators, his early political tactics employed no personal integrity and he only sought the fastest solutions. He expected his demands to be carried out, and when they were not he would act with force. He was wrong to expect politicians, a typically unreliable group of people to support him. His approach though had effect and he did succeed in taking control of Rome. On that basis it seems that whether he took Rome by force or by political manoeuvring did not matter so long as in the end he had Rome. To the provocative actions by the Senate and Pompey, Caesar acted calm and calculated. He had expected not to be greeted as a returning hero; 'the optimates were now firmly gripping the senatorial reins, driving toward a showdown with Pompey as their hired sword'14. ...read more.

They were expected to act in the same way as ours, the only difference being that our military leaders are not so prominent in the public eye as to the Romans. Caesar was certainly a man capable of individual excellence in all these areas. But together he was not perfect enough to avoid murder.25 The actions governed by his integrity doomed him to failure. The question of whether Julius Caesar was an effective leader is difficult to answer; there are many things to consider. He was certainly an extremely ingenuous and proficient military commander suffering few setbacks and extending the limits of Rome's influence in six short years, the most successful man to campaign in Gaul. In that sense he was a very efficient and effective leader, but it has to be taken into account more than just his military life. Arguably his biggest failure was his inability to gather support among the leading men of Rome or to remove them; to them Caesar's actions were beyond reproach.26 Their constant opposition to his leadership and his own impulsiveness served to his downfall in 44BC.27 His personality held aspects which could be viewed as weaknesses when in Roman politics; compassion, trust in others and lack of ruthlessness. So, really and truly, returning to the question of whether he can be regarded as an effective leader because he was assassinated. To this question I conclude that it does make him ineffective, the true cause of his assassination according to Freeman was his style of dictatorship, that his government accepted everyone, and therefore caused resentment among those who had followed him and his reconciled enemies. The men who killed him were a mixture of both his longest serving deputies and his former enemies, as examples Trebonius and Cassius respectively. If he had taken on a separate style of dictatorship or not one at all then he could have achieved his aims and not been assassinated. In the context of effective leaders he was not as apt politically as militarily. He was certainly impressive in achieving his aims but his methods were callous. ...read more.