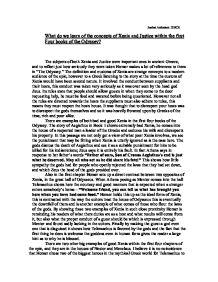 What do we learn of the concepts of Xeniaand Justice within the first Four books of the Odyssey?

Jordan Anderson 12NCR What do we learn of the concepts of Xenia and Justice within the first Four books of the Odyssey? The subjects of both Xenia and Justice were important ones in ancient Greece, and to reflect just how seriously they were taken Homer makes a lot of references to them in "The Odyssey." The definition and customs of Xenia are strange concepts to a modern audience of the epic, however to a Greek listening to the story at the time the custom of Xenia would have been second nature. It involved the conduct between suppliants and their hosts, this conduct was taken very seriously as it was over seen by the head god Zeus. Its rules state that people should allow guests in when they come to the door requesting help, he must be feed and watered before being questioned. However not all the rules are directed towards the hosts the suppliants must also adhere to rules, this means they must respect the hosts house. It was thought that to disrespect your hosts was to disrespect the gods themselves and so it was heavily frowned upon by Greeks of the time, rich and poor alike. There are examples of both bad and good Xenia in the first four books of the Odyssey. The story of Aegisthus in Book 1 shows extremely bad Xenia, he comes into the house of a respected man a leader of the Greeks and seduces his wife and disrespects his property. ...read more.

I believe it is no coincidence that Homer chose two of the biggest heroes in the mythical Greek world for Telemachus to visit, he makes them such big heroes to make readers believe that they may be blessed because they show the proper deference to the gods and follow their rules. Indeed the first thing we see of Nestor is him making sacrifices to the gods when Telemachus arrives, this recurring motif of making "good" people having sacrifices to the gods when we first see them is a good technique employed by Homer. It signifies that the first thing a human should think of is the gods no matter how high or mighty they get, even the King of Sparta! Nestor shows the proper courtesy that is expected and invites Telemachus straight into his home, in fact he even lets him make his libations and have some food before he asks- "Is yours a trading venture; or are you sailing the seas recklessly, who risk their lives to ruin other people?" It shows how seriously xenia was taken that someone would ask that question after they had invited someone to eat with them in their own home. Homer once again involves the highest authority in judging the Xenia of the place and it comes out favorable when Homer describes how "the goddess was delighted at the good manners." ...read more.

Therefore in Aegisthus and the suitors we see similarities in there disrespect for the gods idea of justice and the rules of Xenia, and suitably they both have a gory ending. The tale of Odysseus himself does indeed fit in with this view of justice, because he annoyed the God Poseidon he was forced to roam the seas for 10 years even though he was a great hero. A harsh justice? The story of Orestes is repeated by both Nestor and Menelaus and because Homer has already presented them as god fearing men, who follow the rules of Xenia and are therefore blessed with riches and big palaces we as readers almost instantly agree that there views on other things like justice are correct. Although the concepts of Xenia and Justice that seemed common place in Greek times may seem a little strange to modern audiences it may not be so hard to understand. In fact I believe the rules of Xenia may be a positive thing that would benefit modern society; they would help to bring the community together, and create a sense of trust which is deeply lacking. In fact it is a bad reflection open society that we are so rapped up in our own world that we do not have time for others, let alone the sense of hospitality to allow them into our homes. Perhaps the idea of justice is inconvenient and undemocratic in a modern world, the gods allowing themselves to dispense justice is hardly fair, nor family members taking the law into their own hands. ...read more.