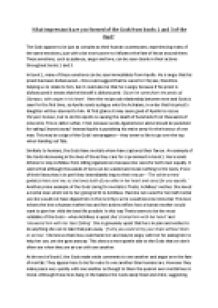 What impression have you formed of the Gods from books 1 and 3 of &quot;The Iliad&quot;?

﻿What impression have you formed of the Gods from books 1 and 3 of the Iliad? The Gods appear to be just as complex as their human counterparts, experiencing many of the same emotions, just with a lot more power to influence the fate of those around them. These emotions, such as jealousy, anger and love, can be seen clearly in their actions throughout books 1 and 3. In book 1, many of these emotions can be seen immediately from Apollo. He is angry that his priest has been dishonoured ? this could suggest that he cares for Chryses, therefore helping us to relate to him, but it could also be that he is angry because if his priest is dishonoured it means that he himself is dishonoured. ?Down he came from the peaks of Olympos, with anger in his heart?. Here the reciprocal relationship between men and Gods is seen for the first time, as Apollo sends a plague onto the Achaians, in order that his priest?s daughter will be returned to him. ...read more.

In this way Thetis seems to be the most relatable of the Gods ? when Achilleus is upset she ?stroked him with her hand? and ?answered him with her tears falling?. She is genuinely upset that he is in pain and wishes to do anything she can to take that pain away. ?If only you could sit by your ships without tears or sorrow?. She knows that Zeus could harm her and may be angry with her for asking him to help her son, yet she goes anyway. This shows a more gentle side to the Gods that we don?t often see when they are at war with one another. At the end of book 1 the Gods make snide comments to one another and argue over the fate of mortals. They appear here to be far ruder to one another than humans are. However they make peace very quickly with one another as though to them the quarrel over mortal lives is trivial. ...read more.

However Aphrodite does not seem to care that hundreds more will die because of her actions here. She then takes Helen back to Paris and does not consider the fact that Helen has emotions and may not want to go back. When Helen does try to speak out, the Goddess just threatens her ?do not provoke me, wilful girl, in case I grow angry and abandon you?. She then ensures that feelings of desire are planted in both their heads, showing that she is manipulative and does not care about others beyond herself and Paris. This creates a bad impression of Aphrodite and does not endear her to the audience. Therefore the overall impression that the Gods give is that although they share many human emotions, the Gods ultimately see themselves as better than mortals ? because they are more powerful - and that mortal lives mean little to them, because to them mortal lives are fleeting seconds in comparison to their immortality. It almost seems as though they consider humans to be pawns in a game. Jessica Ellis ...read more.