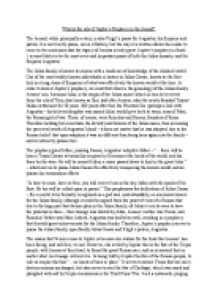 What is the role of Jupiters Prophecy in the Aeneid?

﻿What is the role of Jupiter?s Prophecy in the Aeneid? The Aeneid, while principally a story, is also Virgil?s praise for Augustus, his Emperor and patron. It is not overtly praise, nor is it flattery, but the way it is written allows the reader to come to the conclusion that the legacy of Aeneas is truly great. Jupiter?s prophecy in Book 1 is most likely to be the most overt and important praise of both the Julian dynasty, and the Emperor Augustus. The Julian family is known to anyone with a modicum of knowledge of the classical world. One of the most widely known individuals in history is Julius Caesar, known as the first link in a long chain of Emperors of what was effectively the known world at the time. In order to look at Jupiter?s prophecy, we must first observe the genealogy of the Julian family. Aeneas? son, Ascanius Iulus, is the origin of the Julian name (which in turn he received from the city of Troy, also known as Ilia), and after Aeneas, rules the newly founded Trojan/Italian settlement for 30 years. 300 years after that, the Priestess Ilia (perhaps a link with Augustus ? his beloved daughter was named Julia) would give birth to twins, sons of Mars, the Roman god of war. ...read more.

no limits of time or place.? It serves to assure Venus that her son?s destiny remains unchanged, but also serves to seal the fate of Carthage, which was razed and ploughed with salt by Scipio Aemilianus in the Third Punic War. Such a systematic purging of Carthage, a great and possibly the most damaging enemy to the Roman Republic, could have been nothing but a source of pride to the Roman people, and links to the prophecy that Juno is afraid of, that Aeneas? descendants will destroy her favoured city. In confirming the destiny of Aeneas? descendants, Jupiter also cements the downfall of Carthage, a great event in Roman history. The prophecy also discusses the more recent history for the Romans. Civil war had been a major part of Virgil?s life: when he was born, the war between Marius and Sulla had not yet ended, and then the war between Pompey and Caesar after the collapse of the First Triumvirate, and the war between Mark Antony and the then Octavian after the collapse of the Second Triumvirate, meant that Virgil went most of his life in either a state of impending, or current civil war. After Octavian had defeated Marc Antony at Actium and Alexandra, an end was signalled an end to the civil wars which had engulfed Rome for the better part of a generation. ...read more.

This prophecy ties together all three of these men, and praises the divine lineage and prophesised authority of the latter, Augustus. In giving this praise to Augustus, and making light of his divine lineage tracing back to Venus, Mars and Atlas, Virgil also serves to create an Augustus for people that only know him from his speeches, or what others have said ? here is a prophesy from the lips of Jupiter himself, reading from the ?scroll of the Fates?, divining the situation around Augustus taking the post of Emperor, and promising more, an empire upon which time and place shall have no jurisdiction. Indeed, it is proof of this that we are reading a poem that has endured for near on two thousand years; the ways in which the Roman Empire shaped the modern world still endure today, with this very text considered one of the greatest epic?s written, on par with Homer. Jupiter?s prophesy is designed to be a source of pride to the Roman populace above all things ? among other things, it tells them of their ruler?s divine given authority to rule, and that their people shall be ?the rulers of the world?. In doing this, Virgil both creates propaganda, creating a respect and love for his ruler, but also a sense of national pride, in remembering that their Race and country were created by divines ? Romulus, the son of Mars, descendant of Atlas, Aeneas, and Venus. ...read more.