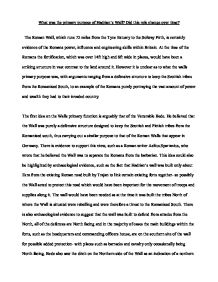 What was the function of hadrians wall

What was the primary purpose of Hadrian's Wall? Did this role change over time? The Roman Wall, which runs 72 miles from the Tyne Estuary to the Solway Firth, is certainly evidence of the Romans power, influence and engineering skills within Britain. At the time of the Romans the fortification, which was over 14ft high and 8ft wide in places, would have been a striking structure in vast contrast to the land around it. However it is unclear as to what the walls primary purpose was, with arguments ranging from a defensive structure to keep the Scottish tribes from the Romanised South, to an example of the Romans purely portraying the vast amount of power and wealth they had to their invaded country. The first idea on the Walls primary function is arguably that of the Venerable Bede. He believed that the Wall was purely a defensive structure designed to keep the Scottish and Pictish tribes from the Romanised south, thus carrying out a similar purpose to that of the Roman Walls that appear in Germany. There is evidence to support this view, such as a Roman writer Aelius Spartanius, who wrote that he believed the Wall was to separate the Romans from the barbarian. This idea could also be highlighted by archaeological evidence, such as the fact that Hadrian's wall was built only about 2km from the existing Roman road built by ...read more.

Then again there are things which could go against this, such as the fact that there is little evidence that there were guards or look out posts along it, although it is possible that the forts had a patrol that went along their section of the Vallum. Another view that has been put forward on the purpose of Hadrian's Wall is that it was built to stop tribes from the North and South uniting against the Romans. It is true that if this union between the tribes occurred the Romans would be in danger from any potential rebellions. Therefore it would have been tactical for the Romans to separate these two groups in such a way. The archaeology definitely supports such an idea; The wall was built solidly with many guarded gates to act almost as customs barriers making sure they knew what and who was coming through at all times. The Vallum is also a strong indication that supports the idea that any aggressors from the south would be prevented by the military zone southern ditches. The fact that there is some evidence that it was built after the Wall also indicates that the Brigantes tribe to the south of the Wall were possibly more of a threat than the Romans first anticipated, and therefore probably put up more of a resistance. ...read more.

We can tell that the Romans felt that the initial threat was from the Northerners by the structure of the defences against them, with settlements linked to the forts appearing on the Southern side of the Wall and the main building within the fort also being places south of the Wall. It can presume that the Wall was initially to mark the end of the Empire by written ideas to show that Hadrian didn't want to expand any further but instead appear to want to mark the boundaries of his empire. This is a decision that the Romans later went against, meaning that the Wall was for some time abandoned while another Wall was built further North. However after that project was abandoned Hadrian's Wall appears to have been reoccupied again. Sources such as that of Aelius Spartanius, also indicate that the Wall was presumably to separate what was Roman from what wasn't, also supporting the idea of the Wall being to mark the end of the Imperium. When trouble rose from the South the Vallum was constructed, which would explain why there are apparent defences from both the South and North, and the original settlements that would have been on the southern side of the Wall were now too established to move; so the Wall evolved to defend from both the tribes of the North and South leading to the idea that the Wall later helped to separate such tribes from rising against the Romans in control. ...read more.