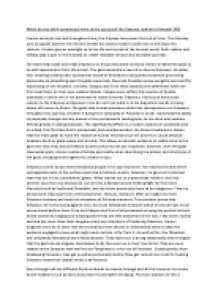 Which do you think contributes more to the success of the Odyssey, realism or fantasy?

﻿Which do you think contributes more to the success of the Odyssey, realism or fantasy? (45) Stories and epics can last throughout time; the Odyssey has proven the test of time. The Odyssey acts as a guide book for the Ancient Greeks but allows modern audiences to still enjoy the content. It helps give an oversight as to the life and morals of the Ancient world. Both realism and fantasy play a part in the Odyssey to create relatable tension and excitable journeys. The Gods help make and break Odysseus on his journey back to Ithaca. Homer enabled the gods to be anthropomorphic from the outset. The gods assemble a council to discuss Odysseus? situation thus showing a democratic society that would be desirable to all audiences (almost promoting democracy as something even the gods would do). Zeus and Poseidon prove vengeful and merciful depending on the situation, similarly, Calypso and Circe show jealousy and selfishness when we first meet them on their own isolated islands. Calypso even suffers the injustice of double standards in which she is not permitted to marry a mortal: Odysseus. Gods such Aeolus add tension to the Odyssey as Odysseus? men do not trust what is in the bag which results in being blown off course to Ithaca. ...read more.

Homer disguises them as to seem real and normal but then throws in a fantastical twist to keep the audience engaged to how what might seem normal, is far from it. As well as this, the Phaecians are completely fantastical and a fictional town. They have such a strong relationship with the gods that the gods do not disguise themselves at all; they turn up in their true forms. They are even related to the Cyclopes who we find out Polyphemus is the son of Poseidon. Subsequently, from disobeying Poseidon, they get punished extremely harshly (they get turned into rocks for helping Odysseus leave their island) which is all fictional. Even through hall the different fictional islands he travels through and all the monsters he meets, Greek traditions such as xenia and proper burial rights still apply. The best example of this is Elpenor. He falls off of Circe?s roof and they do not burry him. By book 11, when Odysseus enters the Underworld, Elpenor begs Odysseus to find his body and properly burry him to which Odysseus complies. Similarly, whilst leaving the island of the Cicones, Odysseus and his crew solute the death of 72 men 3 times each as they sail away. ...read more.

Fantasy adds to the entertainment of the Odyssey just as much as the finalism of reality raining back onto Ithaca as order is restored in a violent manner. Morals have not changed that dramatically since Ancient Greece therefore the Odyssey still applies the good morals of respecting everyone as well as the strong loyalty of family which can be valued and relatable throughout time. As the Odyssey is meant to be a guide book for morals for the Ancient Greeks, the Odyssey will use issues relating to their lifestyle (such as xenia, nostos, kleos and dike). The odyssey allows for real life issues to be twisted into a fantasy form which an ancient audience would respect ? if the gods are anthropomorphic and they offer xenia and correct their ways, then so should mortals. Fantasy cannot be the only aspect to an epic which would last through time, the audience has to be able to relate to the issues which arise to the protagonist. The Odyssey portrays humanity, justice, consequences and loyalty whether that be through people such as Penelope and Odysseus, or the jealousy of Calypso and Odysseus. Readers can relate to the topics that arise in the Odyssey. Homer has enabled an epic to complement fantasy and reality into one 10 year journey across the unknown just to get home. ...read more.