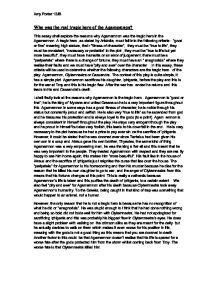 Who was the real tragic hero of the Agamemnon?

Who was the real tragic hero of the Agamemnon? This essay shall explore the reasons why Agamemnon was the tragic hero in the Agamemnon. A tragic hero, as stated by Aristotle, must fall into the following criteria: "good or fine" meaning high stature, their "fitness of character", they must be "true to life", they must be consistent, "necessary or probable" to the plot, they must be "true to life but yet more beautiful", they must have hamartia or an error of judgement, there must be a "periperteia" where there is a change of fortune, they must have an "anagnorisis" where they realise their faults and we must have "pity and awe" over the character . In this essay, these criteria will be used to determine whether the following characters are the tragic hero of the play: Agamemnon, Clytemnestra or Cassandra. The context of this play is quite simple, it has a simple plot. Agamemnon sacrifices his daughter, Iphigenia, before the play and this is for the war at Troy and this is his tragic flaw. After the war has ended he returns and this leads to his and Cassandra's death. I shall firstly look at the reasons why Agamemnon is the tragic hero. Agamemnon is "good or fine"; he is the king of Mycene and united Greece so he is a very important figure throughout this. ...read more.

Clytemnestra is a strange character as she is a very commanding and quite manly. Clytemnestra also has an affair with Aegisthus which shows her disloyalty to her husband. Clytemnestra is quite consistent through the play, her revenge for Agamemnon's life and her slight na�vety about is similar throughout the play and we can see that this is what is driving her through the play. She only changes slightly at the end of the play. In this play Clytemnestra isn't very necessary because anyone could have killed Agamemnon, although, without her the Oresteia could not have continued properly. Clytemnestra's hamartia was that she killed her own husband and went too far by killing Cassandra as well as Agamemnon. Just revenge is right in Greek Society but taking an innocent life is not right. In the Agamemnon there is a change of fortune for Clytemnestra because she has killed Agamemnon and this means that it is only a matter of time before she has to die. The whispers of Orestes from the Chorus tell us that the change of fortune for her will be in the next play - the libation bearers. Clytemnestra also has no anagnorisis in this play, although there are hints that she thinks that she did do something wrong. We feel both pity and awe for Clytemnestra which makes her a very good tragic hero. ...read more.

However, one thing that is important is if the character is necessary to the plot and Cassandra isn't actually necessary because Agamemnon would have died anyway, Cassandra is just an added death and her role in the play is not as important as Agamemnon. Cassandra really just shows the absolute truth to the audience and her role isn't really essential to the play, although, she is a match for Clytemnestra because Clytemnestra isn't used to being ignored. In conclusion, I think that Agamemnon is the most likely candidate that would be the tragic hero in the Agamemnon. However, in the Oresteia (the trilogy), Orestes is the tragic hero because he realises his mistake and fits all the criteria. Agamemnon doesn't have a chance to have an anagnorisis, but if he did then he would be the tragic hero. All of the characters that could be tragic heroes do not fit all the criteria and this makes it a very hard decision to make when it comes to deciding which one is the tragic hero. There is some correlation between the characters but I think that if Agamemnon had more of a chance to realise what he had done then he would be the tragic hero. ?? ?? ?? ?? Amy Porter 12JB ...read more.

This is a good essay in that it performs a very incisive analysis of the main characters of Agamemnon using AristotleÃ¢â‚¬â„¢s criteria for a Ã¢â‚¬Ëœtragic heroÃ¢â‚¬â„¢; there is a clear argument throughout the essay, which is very well structured, and ...

This is a good essay in that it performs a very incisive analysis of the main characters of Agamemnon using AristotleÃ¢â‚¬â„¢s criteria for a Ã¢â‚¬Ëœtragic heroÃ¢â‚¬â„¢; there is a clear argument throughout the essay, which is very well structured, and the candidate in the end decides which character, in Aristotelian terms, could be described as the main tragic hero of the play.

As stated above, this is generally a good essay, although there are ways in which it could be improved. There is not enough close reference to the text, and the candidate resorts too much to simply retelling events rather than direct quotation. In the paragraph dealing with Clytemnestra there is a good awareness that the Agamemnon is part of a trilogy and the candidate places the play within the context of the Oresteia. The candidate in the concluding paragraph is also able to make a distinction between whom we might consider the tragic hero of the Oresteia and whom we might consider the tragic hero of the Agamemnon. However, some of the comments seem somewhat odd, for example, Ã¢â‚¬Å“ClytemnestraÃ¢â‚¬â„¢s hamartia was that she killed her own husband and went too far by killing Cassandra as well as Agamemnon. Just revenge is right in Greek Society but taking an innocent life is not right.Ã¢â‚¬Â This is puzzling, since it is ClytemnestraÃ¢â‚¬â„¢s murder of Agamemnon Ã¢â‚¬â€œ not Cassandra - which prompts Orestes to kill her in the following play. The candidate shows a strong command of Greek terminology and uses it consistently and appropriately throughout the play.

The quality of writing in this essay is good in terms of spelling and grammar, but there is perhaps too much repetition of the same vocabulary and constructions, which make the essay seem a bit monotonous. For example, in the paragraph dealing with Cassandra, there are six sentences beginning with Ã¢â‚¬Å“sheÃ¢â‚¬Â or Ã¢â‚¬Å“CassandraÃ¢â‚¬Â. It is important for candidates to try to vary their style and use different constructions when writing an essay, as this makes it much more interesting and engaging to read.