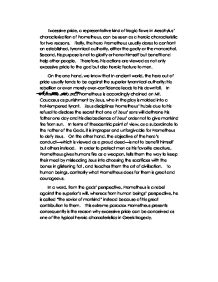 Why might excessive pride be taken as a heroic characteristic in Aeschylus Prometheus Bound?

Excessive pride, a representative kind of tragic flaws in Aeschylus' characterization of Prometheus, can be seen as a heroic characteristic for two reasons. Firstly, the hero Prometheus usually dares to confront an established, tyrannical authority, either the godly or the monarchal. Second, his purpose is not to glorify or honor himself but benefit and help other people. Therefore, his actions are viewed as not only excessive pride to the god but also heroic feature to men. ...read more.

In Prometheus Bound, Prometheus is accordingly chained on Mt. Caucasus as punishment by Zeus, who in the play is molded into a hot-tempered tyrant. Zeus disciplines Prometheus' hubris due to his refusal to disclose the secret that one of Zeus' sons will dethrone his father one day and his disobedience of Zeus' order not to give mankind fire from sun. ...read more.

To human beings, contrarily what Prometheus does for them is great and courageous. In a word, from the gods' perspective, Prometheus is a rebel against the superior's will, whereas from human beings' perspective, he is called "the savior of mankind" instead because of his great contribution to them. This extreme paradox Prometheus presents consequently is the reason why excessive pride can be conceived as one of the typical heroic characteristics in Greek tragedy. ...read more.