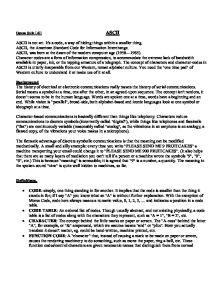 ASCII is not art. It's a code.

Osman Salih L6H ASCII ASCII is not art. It's a code, a way of hiding things within a smaller thing. ASCII, the American Standard Code for Information Interchange. ASCII, was born at the dawn of the modern computer age (1958-1965). Character codes are a form of information compression, to accommodate the extreme lack of bandwidth available in paper, ink, or the tapping armature of a telegraph. The concept of characters and character-codes in ASCII is utterly inseparable from our Western, roman alphabet culture. You need the "one time pad" of Western culture to understand it or make use of it at all. Background The history of electrical or electronic communications really means the history of serial communications. ...read more.

are continuously variable (reasonably called "analog", as the vibrations in an earphone is an analogy, a flawed copy, of the vibrations your voice makes in a microphone). The fantastic advantage of discrete symbolic communications is that the meaning can be modified mechanically. A small and silly example: every time you write "PLEASE SEND ME 9 FRUITCAKES" a machine transporting your email could change it to "PLEASE SEND ME 900 FRUITCAKES". (It also helps that there are so many layers of mediation you can't tell if a person or a machine wrote the symbols "9", "0", "0", etc.) This is because "meaning" is accessible; it is agreed that "9" is a number, a quantity. The meaning in the spoken-sound "nine" is quite well hidden to machines, so far. Definitions. ...read more.

Though usually abstract, and not existing physically, a code table is a list of codes along with the characters they represent, such as "A = 1", "B = 2", etc. * CHARACTER: The concept behind the little marks on paper or screen. The "A-ness" behind the letter "A", for example, or "&" ampersand, which we assume means "and" or "plus". How you actually translate it doesn't matter, eg. could be hand-written, machine printed, etc. * FUNCTION CODE: A "character" that, instead of causing a mark to be made on paper or screen, causes the rendering machinery to do something, such as move the paper, ring a bell, etc. These function codes/control characters are given mnemonic names that distinguish them from normal characters and hint at what their function is. For example the character that rings the bell is named BEL. * * * * ...read more.