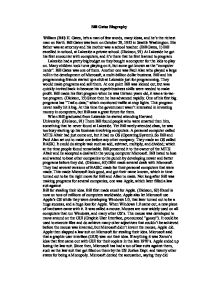 Bill Gates Biography William (Bill) H. Gates, he's a man of few words, many ideas, and he's the richest man on Earth. Bill Gates was born on October 28, 1955 in Seattle Washington. His father was an attorney and his mother was a school teacher. (Bill Gates, 1) Bill excelled in school, at Lakeside a private school. (Dickson, 91) At Lakeside he got his first encounter with computers, and it's there that he first learned to program. Lakeside had a pretty big budget so they bought a computer for the kids to play on. Many children took turns playing on it, but some got known as the "computer nerds". Bill Gates was one of them. Another one was Paul Alan who played a large roll in the development of Microsoft, a multi-billion dollar business. Bill and his programming friends started up a club at Lakeside just for programming. ...read more.

So Bill and Paul Alan set out to make one before any other company. They made an OS called BASIC. It could do simple task such as add, subtract, multiply, and divided; which at the time people found remarkable. Bill presented it to the owner of the MITS Altair and he accepted a deal with the young computer Microsoft. Bill hated to lose and wanted to beat other companies to the punch by developing newer and better programs before they did. (Dickson, 63) IBM made several deals with Microsoft. They had several versions of BASIC made for their personal computers that were made. This made Microsoft look good, and got their name known, which in time turned out to be the right move for Bill and Allan to make. Not long after Bill was making programs for several companies, one was Apple, which later filled a law suit against Bill for stealing their idea. ...read more.

Apple ended up losing the law suit. Since then, Microsoft has had a ton of law suits against them, such as the law suit that got filed on them by the US Justice Dept. and twenty other states for being a Monopoly. Microsoft denied the accusation, saying they did nothing wrong. A judge ruled that Microsoft should be slit into two parts. Microsoft then to the case to the court of appeals who over turned the verdict. Microsoft then agreed to give other software companies more freedom. (Gates, Bill, 1) Bill also has a life outside of Microsoft. He has a wife and one child. He and Melinda French got married in 1994, in Hawaii. (Dickson, 91) His daughter, Jennifer Katherine, was born on April 26, 1996. He's also written several books. One, The Road Ahead held the number 1 spot on New York Times Bestseller list for 7 weeks straight. (Bill Gates, 2) Bill is an avid reader and enjoys playing golf and bridge in his spare time. ...read more.