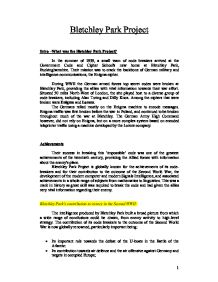 Bletchley Park Project Intro -What was the Bletchley Park Project? In the summer of 1939, a small team of code breakers arrived at the Government Code and Cipher School's new home at Bletchley Park, Buckinghamshire. Their mission was to crack the backbone of German military and intelligence communications, the Enigma cipher. During WWII the German armed forces top secret codes were broken at Bletchley Park, providing the allies with vital information towards their war effort. Situated 50 miles North-West of London, the site played host to a diverse group of code breakers, including Alan Turing and Dilly Knox. Among the ciphers that were broken were Enigma and Lorenz. The Germans relied mostly on the Enigma machine to encode messages. Enigma traffic was first broken before the war in Poland, and continued to be broken throughout much of the war at Bletchley. The German Army High Command however, did not rely on Enigma, but on a more complex system based on encoded teleprinter traffic using a machine developed by the Lorenz company. Achievements Their success in breaking this 'impossible' code was one of the greatest achievements of the twentieth century, providing the Allied forces with information about the enemy's plans. ...read more.

The site has the potential for a great future which builds on the past. Recent initiatives around the Government's plans for growth in the Milton Keynes area have stimulated a climate of change. Bletchley Park sits at the midpoint of the Oxford-Cambridge Technology Arc, and is now home to the Milton Keynes Enterprise Hub, sponsored by SEEDA the regional development agency. Together with the Bletchley Park Trust and other local stakeholders, they see the potential to build on the rich past of the site to inspire current and future generations to innovate and bring forward new technologies and innovations. Role of Computers The world's first computer, Colossus 1, was one of the technologies developed at Bletchley Park to speed up the process of analysis. Colossus was built by post office engineers for the code-breakers at Bletchley Park. The computer was as big as a room and was made mainly from parts used for post office telephone and telegraph systems. It was a development from the mechanical Bombes. The Bombes were enormous, noisy electro-mechanical machines, which could check through combinations of letters far quicker than a human being could. ...read more.

I had made specific time interval where between 0-3 hours of research and then 2 hours on extracting the relevant information which was required. Finally I had allocated 2 hours to write this up in the form of a report. Resources and Reference: * http://www.bletchleypark.org.uk/ This modern site had all information with regards to the wartime History and contains information on the Enigma cipher. * http://www.iwm.org.uk/online/enigma/enigma7. This web site had useful information form the Imperial War Museum upon the breaking of the Enigma code and how this was carried out. * http://portal.telegraph.co.uk/htmlContent.jhtml?html=/archive/1999/06/11/nblet11.html The following website was detailed in the aspect that this had given information on the ways used to tackle and break the code through the Colossus machine which was built. * Britannica Encyclopaedia This encyclopaedia had given much information on the background of Bletchley Park and the importance of the discovery of breaking the code. This was very helpful, and useful as there are many different headings with much information of relevance. * H. Flowers, The Design of Colossus (Annals of the History of Computing, Vol. 5 (No. 3), 1983, pp. 239-252) This book contained some useful pictures of the colossus machine along with a description of how it was designed for the purpose of cracking the code. ?? ?? ?? ?? 1 ...read more.