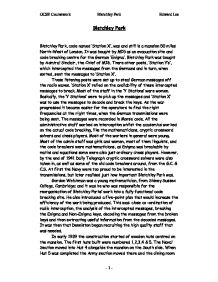 Bletchley Park Bletchley Park, code named 'Station X', was and still is a mansion 50 miles North-West of London. It was bought by MI5 as an evacuation site and code breaking centre for the German 'Enigma'. Bletchley Park was bought by Admiral Sinclair, the Chief of MI6. There other posts, 'Station Y's', which intercepted the messages from the Germans and in turn, when sorted, sent the messages to 'Station X'. These listening posts were set up to steal German messages off the radio waves. 'Station X' relied on the availability of these intercepted messages to break. Most of the staff in the 'Y Stations' were women. Basically, the 'Y Stations' were to pick up the messages and 'Station X' was to use the messages to decode and break the keys. As the war progressed it became easier for the operators to find the right frequencies at the right times, when the German transmissions were being sent. The messages were recorded in Morse code. ...read more.

However, Knox, Jeffrey's and Turing moved into the Cottage in the Stable Yard so that they could work better with less distractions. Not many of the first arrivals knew what they were doing and had very little experience, but learnt quickly. The new young operators also knew nothing about their foreseeable work. After the first arrivals, Denniston's mathematicians arrived, but they did not get on well with the older more experienced code breakers. This was because the older code breakers felt "out-of-date" as the new lot were young and had a different method to code breaking. It became blatant that the biggest break-through was from the mathematicians from the first years of the war. They were getting closer and closer to breaking the Enigma. Messages were sent to other huts via a broomstick and a wooden tunnel that was constructed to increase secrecy between a few of the more important huts (later on the messages were blasted along the tunnels with compressed air), like Hut 6 and Hut 3. ...read more.

At this point the 'Yanks' came over to help the Allied, only after they were bombed by the Japanese. Along with the Americans came new technology, many more soldiers that were properly trained and machines that were in better condition and were all better quality. This gave the Allies the advantage at this point in the war as they now had extra supplies and reinforcements. The first computer was built as well making the work a lot faster for everyone, this was code-named Colossus, it was room size. In conclusion to this, 'Station X' provided lots of important information for the military to use to their advantage on the battlefield. This also enabled many lives of the Allies to be saved. Without these code breakers and broken keys the war may have turn in favour of the Germans, so deeply the work that was done at 'Station X' was truly important. Although Bletchley Park was originally bought as an evacuation site for MI5 it became the most important code breaking site before, during and after the war. GCSE Coursework Bletchley Park Edward Lee - 1 - ...read more.