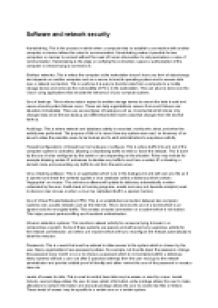 ﻿1. Software and network security Handshaking: This is the process in which when a computer tries to establish a connection with another computer or device defines the rules for communication. Handshaking makes it possible for two computers or devices to connect without the need of human intervention to set parameters or rules of communication. Handshaking is the steps or verifying the connection, speed or authorization of the computer or device trying to connect to it. Diskless networks: This is where the computer at the workstation doesn?t have any form of data storage and depends on another computer such as a server to load its operating system and to access data over a network connection. This is useful as it is easy to transfer data from a computer to a mobile storage device and removes the vulnerability of PC?s in the workstation. This can also be done over the ?cloud? using applications that emulate the behaviour of your computer system. Use of backups: This is where data is copied to another storage device to ensure the data is safe and secure should system failures occur. ...read more.

This is done by the use of a tunnel which is an agreed route for encrypted traffic. This creates a trusted connection on a system which is not trusted. This helps prevent packet sniffing and fraudulent authentication. Intrusion detection systems: This monitors network activity for someone trying to break in or compromise a system. Some of these systems are passive and will record any suspicious activity for the network administrator and others are reactive which will try to reconfigure the firewall automatically to block the intrusion. Passwords: This is a word that must be entered to allow access to the system which is chosen by the user. Many organisations have password policies, for example, not to write down the password, change the password every month or so or to choose a password which is not contained within a dictionary. Many systems will lock a user out after 3 password attempt, then the user must go to the network administrator and provide suitable proof of identity and either remind the user of the password or create a new one. ...read more.

If the data or information has been backed up in an external media device in a safe place such as on an optical disc or on paper then the required data/information only needs to be retrieved from its safe location and the data/information is recovered, this reduces the downtime resulting from the disaster. Another form of disaster recovery is the use of a system backup, which is a mirror image of the computer systems used by the business; this means if there is a failure with one or all of the systems then the backup system can be put in place to prevent downtime caused by the failure. If damage occurs to the hardware of the system then spare parts that are kept in case of hardware failure are a good idea, however this is not very cost effective. Alternatively, in the case of a fire or flood and an entire system has been made unusable then a whole system replacement may be required, this may be stored as a backup in a safe place or bought in reaction to the disaster, this is the least effective way to prevent downtime. ...read more.