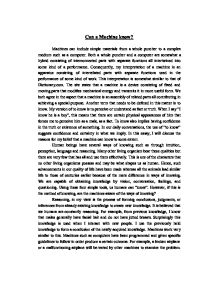 Can a Machine know?

Can a Machine know? Machines can include simple materials from a whole puncher to a complex medium such as a computer. Both a whole puncher and a computer are somewhat a hybrid consisting of interconnected parts with separate functions all intertwined into some kind of a performance. Consequently, my interpretation of a machine is an apparatus consisting of interrelated parts with separate functions used in the performance of some kind of work. This interpretation is somewhat similar to that of Dictionary.com. The site states that a machine is a device consisting of fixed and moving parts that modifies mechanical energy and transmits it in more useful form. We both agree in the aspect that a machine is an assembly of related parts all contributing in achieving a special purpose. Another term that needs to be defined in this matter is to know. My version of to know is to perceive or understand as fact or truth. When I say "I know he is a boy", this means that there are certain physical appearances of him that forces me to perceive him as a male, as a fact. ...read more.

By discovering what is askew and gathering the data, the machine is capable of coming into a possibility of problems. This process is done deductively similar to the male example above. Machines discover whether the broken airplane has "facial hair" and "b*****s" and can conclude if it is a male or not. This example suggests that a machine is able to know by reasoning. A machine works logically by following the axioms and the premises. It takes the steps that are presented in order to achieve a simple task. For example, when we insert 1+1 on our calculator, by using deductive reasoning it will produce 2. The calculator generates rationally by following the simple guidelines such as A+B = C. With these straightforward principles, calculators can formulate any problems involving numbers ranging from negative infinity to infinity. This applies very much to computers. Computers are programmed specially and given specific steps so that the desired outcome is achieved. Although a machine is able to know by reasoning, they are emotionally limited. Scientist Edward O. ...read more.

This is shown by the correctness of the answer. The truthfulness of the solution however, is not important for we assume that the axioms are true. Regardless of the reliability of the axioms, if the conclusion follows the premises logically, then the solution is valid. With recent developments in technology, translation sites are becoming more popular to multilingual users. Personally, I have resorted to the site at times when necessary however I never had much success with it. Often the translation would be perplexing and grammatically incorrect. In addition, the translation comes out almost like a puzzle forcing the user to fill in the gaps. Although it often misses small but crucial information and are grammatically inaccurate, the site is able to translate the general picture of the passage. In this aspect, translations sites can be useful to absolute beginners and anyone who has no clue of the passage. The translation site suggests how humans more knowledgeable in language and communication, but with the current sites, it demonstrates how machines do have future potential in this area. However, the current site can infer that no matter how many premises and guidelines are installed, machines will never know as much as humans do. ...read more.